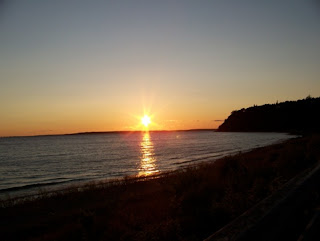 Shooting Into the Sun has been contracted by Champagne Books for publication in May, 2010.

Nature photographer Rylee Morgan invites her recently un-engaged younger sister, Lexie, to accompany her on a business trip across the country. Lexie, the wild child of the family, challenges Rylee to stretch her boundaries and live outside the neatly constructed box in which she’s placed herself for safe keeping. A perfectionist, Rylee is haunted and driven by ghosts from her past. She locates and confronts the father who abandoned her and Lexie sixteen years earlier, and she finds herself falling for a hitchhiker who is crossing the country to lay his own ghosts to rest. Rylee is breaking her own rules left and right.

Rylee must face her fears, dare to step beyond the safe boundaries she has constructed, and risk her heart. And in order to do so, she has to break a cardinal rule of her craft, both literally and figuratively, by Shooting Into the Sun.

~ * ~
But first -- Next Time, I'm Gonna Dance is scheduled for January release.
Facing breast cancer for the second time, and certain she could die, Emmie Steele takes an inventory of her life. She realizes her one regret—she never learned to dance—and makes this a metaphor that gives her the strength to survive.
~ * ~
While you're eagerly awaiting these books, visit my website at: http://www.geocities.com/lindarettstatt or stop by http://www.wings-press.com/ to check out one of my previously published books: And the Truth Will Set You Free; Pieces; The Year I Lost My Mind; and, Finding Hope.
I'm taking a well-earned vacation and will be traveling to Arizona until the end of May. Despite my promise that this will be 'time off', I'm sure at least one new story line will worm it's way into my brain. Who wouldn't be inspired by the red rocks and canyons around Sedona, or the desert of Tucson?
See you in June.

Linda
Posted by linda_rettstatt at 1:39 PM No comments: