Sneak Peek: Shooting Into the Sun 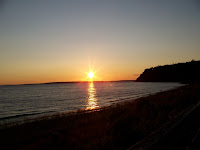 My next novel, Shooting Into the Sun, will be released in May, 2010 by Champagne Books. I thought I'd give you a sneak peek here. Enjoy!
(This is not the cover, but it is a sunset shot on Mackinac Island, where part of the story takes place.)

~ * ~
When people know they’re about to do the wrong thing, they don’t look you in the eye. Parents were no different.
~ * ~

“Never shoot into the sun.” Her father repositioned himself to pose for the photograph.

“Why not?” Rylee Morgan lowered the camera and squinted at him.

“Because it’s a rule. If you follow the rules, you’ll avoid trouble, and you’ll create beautiful pictures.” He stood in the back yard, the white aluminum siding of their house providing a backdrop.

She wanted to believe him. Rylee snapped the photograph, capturing his image.

He motioned to the camera bag he’d set on the ground beside her. “You remember how to switch the lenses?”

“How about one more picture of us?” He pulled the camera from her hand and drew her close to his side. At twelve years of age, she was nearly his height. Extending his arm, the camera lens reflecting their images, he pressed the shutter release.

He handed her the camera, then hugged her against him. “I love you, angel. Don’t ever forget that.”

She choked on her words. “You don’t have to leave, Daddy.”

“Take me with you.” She knotted her fingers in his sleeve.

A muscle twitched along his jaw. “I can’t.” He held her for another moment, and then pried her hands free. Bolting to the car without a backward glance, he pulled from the drive.

“Daddy!” Rylee chased after him. At the curb, she raised the camera and clicked the shutter frantically until she heard the whirr of rewinding film. Tears blurred her last glimpse. His car turned and disappeared from her view.

She hugged the Nikon against her chest and cried.

Never shoot into the sun--the voice played in her head. The rules she had learned early in her career never failed to produce flawless photographs. The rules she had developed for life had not served her as well. In the sixteen years since her father’s departure, Rylee had kept herself busy, focused on her career, and remained safe inside her well-constructed boundaries.

Rylee resituated the tripod and checked the sun’s position. She stepped behind the camera, looked once again through the lens and waited, watching the slight movement of the leaves. Water bubbled over rocks. Slowing the shutter speed, she could create a smooth cascade effect. Blue sky and white clouds reflected on the stream’s surface. This stretch of the rapids where the Youghiogheny River ran through Ohiopyle State Park in Pennsylvania was her favorite spot for shooting.

Her thumb rested on the shutter release, prepared for just the right moment. The breeze subsided and the shadows shifted. Then, just as she pressed the button, some jerk decided to walk on water.

Rylee lifted her head and stared. A hiker made his way across the exposed rocks and into the middle of the narrow river--directly into the center of her view. She walked to the water’s edge and, with hands on hips, shouted, “Excuse me! You’re ruining my shot.”

Shooting Into the Sun
Copyright 2010, Linda Rettstatt
Available May, 2010 from Champagne Books
Posted by linda_rettstatt at 12:21 PM No comments:

New Review for And the Truth Will Set You Free 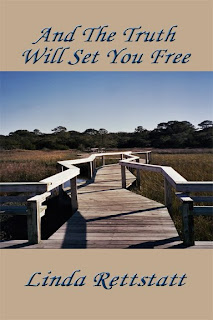 Check out the newest review for my first novel, And the Truth Will Set You Free. It's posted now at author, Rhobin Courtright's blog, Rhobin's Rambles.
Thanks, Rhobin, for a great review!
Posted by linda_rettstatt at 5:09 PM No comments:

How I Spent My Snow Day 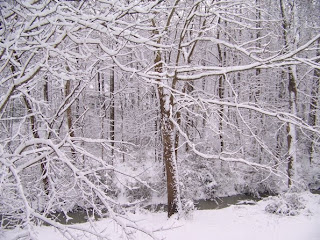 I grew up in southwestern Pennsylvania. Scenes like the one in this photograph weren't all that unusual in early February. You pretty much expected to awaken to tree limbs weighted by snow. But here's the thing--I live in Mississippi now. I can expect to see a variety of sights from my balcony--kudzu slowly choking the trees, some sort of snake (shudder) slithering toward the creek, maybe even an armadillo foraging at dusk. I do not expect to find five inches of snow blanketing the volleyball pit beside my apartment building. Yet this is what I wakened to earlier this week.

Now, I'm not complaining about having two snow days off of work. I don't drive in ice and snow. That's why I no longer live in Pennsylvania. Well, one of the reasons. So, what does one do on a snowy day in Mississippi?

I got up early to check the road reports and wait for that all important call from the boss: We're closed. After feeding the cat her breakfast, I crawled back into my still-warm bed and sank into a pleasant dream about some sandy shoreline and sunshine. Mmmmm. Waking again in an hour (when said cat decided to parade around my prone body and purr into my exposed ear), I got up, made coffee and watched the news reports of traffic on I-240 inching around the numerous accidents at every overpass. And I asked myself, "What do those people do for a living that is so urgent as to risk their lives and the lives of others just to get there?" Seriously, unless you're a surgeon and your patient will die without the life-saving surgery only you can perform in the next two hours, why do you have to be somewhere?

Well, I didn't have to be somewhere. I happily sat in my sweats, my hair standing on end from sleep, and browsed the many writing groups to which I belong. Ooh, four of them were allowing promotional postings and excerpts. I shifted into 'work' mode and promoted the heck out of my books until the noon news. Then I made lunch and took a break to watch--you guessed it--drivers continuing to try to navigate around Memphis through weather they weren't used to. I began to lose sympathy for them.

I went back to the laptop and pulled up the manuscript I've been working on. It's a paranormal romantic suspense. After two chapters, it was time for a break. Or maybe a nap. Isn't that what people do when they're given the gift of a free day?

I think I mentioned the cat. Let me introduce you to Olivia who now only answers to the name Binky (long story). I got up to head to the bedroom and realized I'd not seen Binky for a few hours. Usually she will plant herself right under the front of the recliner foot rest so I have to be very cautious about getting up. But I checked first--no Binky.

She couldn't have gone far, so I shuffled to the bedroom, all set to snuggle in and snooze. Maybe even enjoy another technicolor dream. And then I found Binky. My bed pillows were all askew, and my quilt bore a distinct round lump right in the center of the bed. I lifted the quilt and the top sheet and peered beneath. Two round black eyes blinked back at me with an expression that said, "You got a problem?" 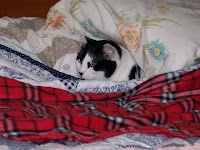 Napping in my own bed was no longer an option. I grabbed a blanket and returned to the recliner. I stretched out and closed my eyes, confident I wouldn't have to worry about squishing the cat when I got up. I was just about to accept an exotic pink concoction topped by a little blue paper umbrella from a George Clooney look-alike when something poked my arm, waking me.

Apparently, it was kibble time. I got up and scooped dry kibble into her bowl. Awake now, I fired up the laptop. I pulled up the story I'd been working on and read through the chapters. One of the characters in this book is a dog--a Jack Russell terrier unimaginatively named Jack. He's a yappy, annoying little beast who is always interrupting his owner at an inconvenient time to either be fed or walked.

I looked over to where Binky, her hunger now satisfied, stretched out languorously on the back of the sofa--napping away. I highlighted my description of Jack and hit delete. Then I typed in my new annoying, demanding little character, Binky the cat.

Next time I have a snow day, I'm not even getting out of bed. Let her forage for her own kibble.


Linda
Posted by linda_rettstatt at 12:23 AM No comments:

I've been interviewed again, this time by Paranormal/Romance author Margaret West. Come visit her blog and post a note.

Margaret West - Paranormal/Romance Author
Posted by linda_rettstatt at 10:43 AM No comments: