What the heck is 'seasoned' romance?

You may have heard the term 'seasoned' romance. On some sites like Amazon and Smashwords, the keywords 'later in life romance' are used to identify romance novels that feature heroines and heroes who are a bit more mature and often embracing a second chance at love. As an author in the 'a bit more mature' (at least age wise) category, I began to write seasoned romance stories over the past few years. And I love them. What does seasoned romance offer that contemporary romance doesn't? They both tell a story of love and romance and a happy ending.

That's all true. But writing older characters who have been around the block once or twice and, frankly, have more baggage (or wisdom) gives the author so much more with which to work in both character development and plot/story line. We older folks often know things--things we've garnered through life experience and by making mistakes. Often those things make us more interesting, more complicated, and a lot more fun. Besides, trying to relate to a pair of twenty-somethings falling in love and dealing with the conflicts that threaten their happiness is a distant memory to those of us two decades or more beyond those years.

How many times have you said, "If I knew then what I know now..." Well, my characters know now what they didn't know then, and that can make romance all the more interesting, scary, wonderful, and fun--did I say scary? The more mature folks I've talked with who find themselves on a second or third go-round in the romance department generally say how confusing and scary the world of dating can be. It's not as simple as dinner, dancing, and a dalliance (does anyone use that word anymore?). In any case, you know what I mean. Often there are past hurts and losses that come into play. Adult children can be either supportive of a new relationship, or a royal pain in the arse. When sixty-something Mom starts dating again, everyone panics. Sometimes even Mom. Dating can seem like a minefield. Especially when you don't know the rules any longer. Imagine the sixty-something hero thinking of dating as he did in his twenties but pursuing a woman in her sixties. Those old pick-up lines just won't work anymore. If he's not more sophisticated, he'll end up making a fool of himself. And many do.

And, heavens, what about sex? I mean, these are old people we're talking about. Right? Wrong. These are mature adults with experience and desires. That's right, I said it. Mature men and women have desires. Fifty-, sixty-, and even seventy-somethings aren't dead yet. Crafting realistic sex scenes to fit the character's age and experience can be a challenge. It can also be a lot of fun. Don't rule anything out. Mature characters bring more to the table. Or to the floor, the bedroom, or the back seat. In the case of Sarah in Sarah's Second Act, the hottest scene takes place on a boat.

In a seasoned romance, the hero and heroine also can bring a deeper understanding of themselves, what drives them, what they want. And what they don't want. They've had time and opportunity to learn what works for them and what doesn't. They may have lived their dream and, now retired, have to find a new dream or new passion to pursue. Many have lost the first loves of their lives, some having delayed romance and marriage for the sake of a career. It's not that the more mature characters have lived a life, learned from it, and now have it all together. What fun would that be? They have their own doubts, fears, and challenges. Just because they've lived longer doesn't mean they have the recipe down for the perfect relationship. But they bring a little more seasoning to the relationship. Which is why I personally prefer the term 'seasoned' to 'later-in-life.' Salty, spicy, with a sprinkle of pepper and a dash of hot sauce.

Seasoned or later-in-life romance offers readers a story that can better parallel those of the more mature reader. Just as contemporary romance novels appeal to those in their twenties and thirties because the stories can mirror their own or the story they wish was theirs and they can better relate to characters closer to their age, seasoned romance offers the same advantages to the more mature reader.

Here are a sampling of some of my seasond romance novels: 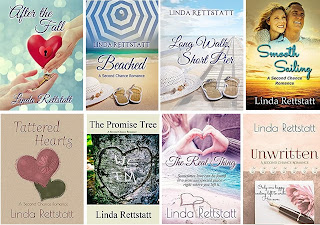 And some of my women's fiction novels include seasoned romances:

All of these and more are available at Amazon.com
Posted by linda_rettstatt at 4:23 PM No comments: