Some people should just take a long walk off a short pier. I remember hearing this phrase used when I was growing up, this or some version of it. It was a favorite phrase of Blaire Copeland's father, and it comes to mind as every little things seems to be getting on her nerves, including her doctor.

But what if taking a long walk off a short pier was a good thing? What if it led you right to where you were supposed to be?

At fifty-five, Blaire Copeland was certain she'd slipped quietly through menopause. But the hot flashes were relentless. Her doctor--a man--tells her not to worry, that she's just going through 'the change.' After being irritated by his attitude, Blaire begins to wonder what she's changing into. She's divorced, has a twenty-six year old daughter who is married and part-owner of a day care center, and a twenty-seven year old son, Max, who still lives at home and has buried himself in his education. Blaire occupies her time overseeing the operations of a charitable foundation her father had started.

Blaire decides time away is in order. Her mother confirms this, telling her every woman has her time to take a step back and re-evaluate her life. Blaire packs up her car and heads south to Eventide, her mother's family home on Isle of Hope, Georgia. The Victorian has not been lived in for some time, but a caretaker has been paid to keep the place up and the lawn cared for.

Blaire arrives and is greeted by the caretaker's fiancee and two children. What is supposed to be time away from everyone for Blaire to think turns into her own caretaking job. It also leads her to Davis Rembert, the boy she once fantasized about marrying. She's surprised to find the attraction still burning.

Her long walk off a short pier, and the decisions she makes, brings her right to where she needs to be. 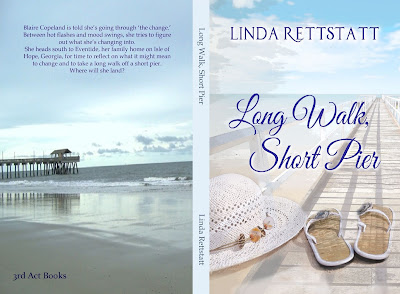 Available in ebook and trade paperback at Amazon.com

and in ebook at Smashwords

* Signed paperbacks can also be purchased directly from the author.
Email request to: lindarettstatt@yahoo.com


Posted by linda_rettstatt at 12:34 AM No comments: