Why I Write What I Write

Here's what I had: A pretty good grasp of the basics of grammar, spelling, and punctuation. A decent handle on language--words. And PASSION. Mostly, I had passion. The passion to tell a good story, to bring characters to life, to engage someone else in my imaginings.

Inspired largely by the writing of Elizabeth Berg (who I personally think is brilliant at characterization and story-telling), I set out to write a book. My only goal was to find out if I could write a book from start to finish. That was my singular goal. What would I write?

Though I had little knowledge of genre and the technical differences between genres, I wanted to write the kind of stories Berg wrote. So I determined my book would be a story about a middle-aged woman facing a crisis that propels her into following her dreams. I found out later that what I wrote was considered Women's Fiction. Well, that label worked for me. So I identfied myself as a writer of Women's Fiction and went on to write three more books over the next year.

I desperately wanted to be part of a writing community and, unable to find a local group, started my own critique group on-line (still clueless of what critiquing meant). I was quickly joined by a few wonderful romance authors who taught me invaluable lessons. Through critiquing their work, I found myself drawn to writing romance. It was fun, not to mention the richness of having two primary characters to draw upon. I realized that most of my women's fiction work included a hint toward or a sub-plot of romance.

I learned the rules for writing romance--then promptly broke many of them because, well, I just don't do well with rules. Would the Romance Writers of America approve? Probably not, but my readers had no problem. What I end up with in a novel is generally a hybrid--either primarily romance with a women's fiction sub-plot for the heroine, or women's fiction with a romance sub-plot. It can make marketing a challenge, but I don't mind the challenge.

I write what I write because I enjoy writing strong, yet vulnerable, female characters who have to dig deep to find their own inner strength. I like writing women who are flawed and funny and determined, who have a rough edge hewn by their life experiences. I write romance into my stories because it's fun. And it gives me a chance to write from the male perspective. Now that's the biggest challenge--to try to think like a man and still not make the character too cliche.

I write what I write because I want to give readers something that is believable, realistic, with characters who are relatable and enjoyable, and the pleasure of a happy ending. Let's face it, life offers enough difficulty and unhappines. Fiction is, among other things, intended to provide the reader with an escape.

When I realized that my books would largely appeal to a female audience, to reflect the experiences of women, I branded my work as: Writing for Women: Stories of strength, love, humor, and hope.

Why? Because I think we all can use a little encouragement, humor, and hope. Especially hope. After my second book was published (The Year I Lost My Mind), I received an email from a reader thanking me for the book because it made her feel less "crazy" while she navigated the turbulent waters of menopause and the internal changes that brought for her. She felt less alone in that journey. I cried at that email because I knew I'd met my goal. Even in fiction, we can help people find hope and make sense of things in their lives. Mission accomplished.

I write because to not write would be like not breathing. Something inside me would just shrivel up and die. We all need passion in our lives--that one thing that, when we pursue it, engage it, it gives us life and purpose and drive. We find that exact place where we are meant to be.

In the words of Joseph Campbell: 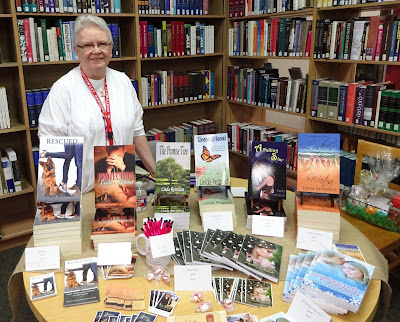 Have a blissful day,

Hearts and flowers for St. Valentine’s Day?
A text sent and received with a smile.
Sneaking a kiss on the way to class?
All was right with the world.

Then come the sounds, the popping, the ricochet, the screams.
Valentine’s Day was just a dream, the red that runs the halls
is real.
The panic as refuge is sought, bodies crushing together.
It’s happening—again.
Terror pulsing as bullets rain and shatter the innocence of children slain.

Children left with lifeless eyes and fear-filled hearts,
A text sent, “I love you, Mom. We’re being killed.”
“Our thoughts and prayers are with you. This was never what
we willed.”
I close my eyes against the scene, the rhetoric resounding
in my brain.

When I opened up my eyes, I saw
That the children were not there anymore.
In their place, a monument stood,
A memory of their childhood.

But from the smoke and apologies
An image rose and began to move.
The children—united—no longer children now
Will lead the way and show us the truth we have refused to see…

How blinded we can be.


Posted by linda_rettstatt at 9:04 PM No comments: 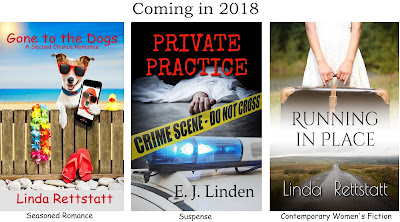 I'm intending to release three books this year. Yes, that middle one says it's by E.J. Linden. I'm adopting a pseudonym for what will be a continuing line of suspense novels. If all goes as planned, I'll release a book in May, August, and October. As long as I continue to listen to Winnie the Pooh, nothing should go wrong.

Happy reading,  Linda
Posted by linda_rettstatt at 8:34 PM No comments: