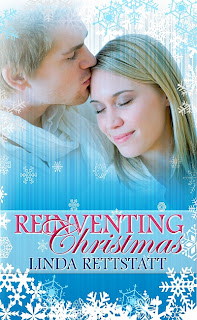 Coming November 15 from
Champagne Books.
Read an advance review.
Posted by linda_rettstatt at 12:27 AM No comments: 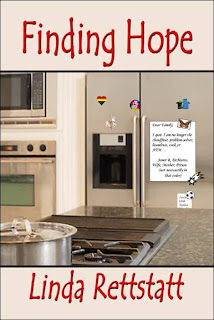 Great news! FINDING HOPE is featured in the very first issue of the new online magazine, THE JOY RIDE. You can check it out with this link:


http://issuu.com/joysource/docs/joy_ride_oct11_magazine/1?zoomed=&zoomPercent=&zoomX=&zoomY=&noteText=&noteX=&noteY=&viewMode=magazine
And while you're there, subscribe to the magazine. It's got lots of great articles for women.

Thanks to Julie McGrath for including FINDING HOPE in her first issue.

Linda
Posted by linda_rettstatt at 10:55 PM No comments:

1. Every author I’ve met has their own unique story of how they found their way into writing. What path led you to become an author?


Path? Um, yeah, like I planned it...hmmm so very not so! I’ve been an avid reader since my teenage years huddling in bed with a good book every night. I could get lost in a good story for hours on end. But my writing path didn’t even begin until I was almost 40 and had a child to read stories to every night. Well, reading turned into making them up, which eventually turned into writing them down because she wanted me to remember them. Then one day as I finished typing those children’s stories into my computer an idea blossomed – and that’s when I meandered onto this path.

2. What aspect of the writing process to you enjoy the most? What part of the process do you dread?


I love the beginning when the idea is fresh and the story is just starting out. See I can’t plot to save my life. I know where I’ll start and where it will end. I probably have a few ideas of things that will happen somewhere in the middle, but other than that, it’s like reading a good book. I’ve made myself cry many times as characters unburden griefs from the past that I HAD NO IDEA those things had happened to them. I’ve learned to keep a box of tissues near my work desk!


3. What author has most influenced or inspired you?

You know, this is really an unfair question because every author I have ever read, and ever will read has the potential to influence me. For example, I recently read an inspirational romance that made something click in my brain and say, “That’s what my story needs!” (Thank you, Marianne Evans! LOL) I have to admit though, Nora Roberts was probably the first author I ever had to get my hands on everything she’s written – love the Irish stories best. Then there’s Nicholas Sparks, and Karen Kingsbury, and Suzanne Brockman, and Rachel Vincent...well, you get the idea...


Well, my writing is almost as eclectic as my reading. So I’ll stick to what’s near and dear to my heart nowadays! I have 3 stories that have been published so far – 2 others that have been rejected and are in the process of being rewritten. First there’s Daffodils, a ‘second chance’ inspirational romance. There’s just something about getting a second chance at a romance that was meant to be that makes my heart sing. Then there’s Dance of a Lifetime, a sweetheart romance that was published as part of a Dance anthology. And I have one paranormal under a different name that was actually my first story ever published. The two rewrites I’m working on are both inspirational romances that I hope to see placed with White Rose Publishing when they’re done.


5. What can readers expect in the coming months? What are you working on now?


Well, I’m almost done with the rewrite of a story about a woman and her coffee house. This story is near and dear to my heart because I play guitar and write music myself, and I had a dream that I opened a coffee house. This is the story of what the place I envisioned would be. And it has a sequel that’s already more than half written, also.


6. Where can you be found on the web? (web site, blogs, social network links)


Thus far, I only have a blog. Eventually I do plan on having a web site as well, but for now I can be found at http://www.donnabsnow.blogspot.com/. 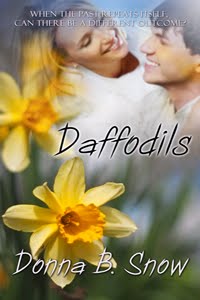 So here’s a little bit about Daffodils and Dance of a Lifetime!
High school sweethearts...I think we all remember that perfect couple. Everyone just knew they would make it, they would be together forever. I had friends like that in college. They were perfect for each other. Started as high school sweethearts, and yup, 30 years later, they're still together.

But what about the ones that didn't make it...the ones that broke up and went their separate ways. How many of them realized later in life that they missed their one and only - let the love of a lifetime get away. Would they grab a second chance if they had it?

Here’s a peek at Daffodils. It’s all about second chances...

Margaret Ellington and Lukas North have a history to resolve. He's determined to reclaim the love he threw away ten years earlier. She’s afraid to let her heart be broken again.

When the past repeats itself, can there be a different outcome?

After dinner, everyone headed for their vehicles while Margaret smiled and waved her thanks. Once again, Lukas stood at her side, his shoulder brushing against hers as he smiled and waved alongside her as if they had both moved.

She took a deep breath and turned to him, studying his face as the last of the vehicles pulled out onto the street. Soft brown hair fell into his eyes, reminding her of the boy she once loved. She fisted her hand to keep from brushing it back for him like she had done so many times in the past.

Returning her look, Lukas took both her hands in his strong ones, smoothing her fist. He lifted a knuckle to her cheekbone, the gesture melting a small piece of her heart.

She had to remind herself his sympathy was ten years too late.

“I wish I could change the past, that things could have been different a long time ago.”

Margaret looked down at their hands and folded her fingers over his. She couldn’t deal with that discussion now…maybe ever. “We can’t change history. Ten years ago you made your choices.” She shrugged, holding herself stiff, her voice flat. “Let’s not dredge it up now. We were just kids.” She couldn’t go there. She would shatter if the wrong words were spoken. Dear Lord, give me strength. You promised not to give me more than I can handle, Lord. Well, I’m nearly there. Please…She turned away, blinking back tears.


I wandered a little off the beaten path when I heard there was a publisher looking for stories about dancing. No, I'm not a dancer, never been a dancer, never wished I was a dancer (ok, so maybe I wished it...), never knew any professional dancers...but it just so happens that I wrote a short story to enter in a contest last year - about a dancer. Of course, I never entered it because by the time I finished writing I decided I wanted to make it into a full length story some day. And then I saw the call for an anthology about dancers and it nudged my memory.

So here it is! 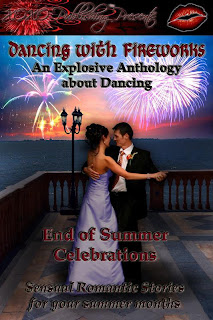 Dances with Fireworks is a collection of 5 short stories celebrating romance and the love of dance. So here's a little blurb from Dance of a Lifetime - my short in this anthology:

She should have left right after the funeral. But she couldn’t bear to think of dancing without Chris. He should have been there practicing with her, facing her at every turn, laughing at her foibles, rubbing the aches out of her feet when they were done.

“You need to take some time off,” Cody answered as he pulled her close again and rubbed her back. “He was your brother! They can’t expect you to step out on a stage just a month later.”

“You’ve heard the mantra,” she said softly as she eased away from him. “The show must go on.”

“So let it go on without you! Don’t you have an understudy? Obviously if they’re ready to start rehearsals they must have one for Chris’ part.”

“Of course they do. But if I don’t dance in this show I don’t know if I’ll ever be able to go back.”

“They wouldn’t blackball you because of this!”

Cody stared into her eyes for a moment then slid his hands down her arms and sat back on his heels. “I saw you together in The Nutcracker last Christmas.”

Her head shot up. “Why didn’t you let me know you were coming, that you were there? How …when …?”

He touched her cheek and pushed a strand of her long blond hair behind her ear. “I knew you were in it. I’ve known about every show you’ve been in since you left.”

He stopped stroking her hair and looked straight into her soul. “Because I loved you.”

Dancing with Fireworks can be found at https://www.xoxopublishing.com/shop-online/index.php?main_page=product_info&cPath=32&products_id=195
Posted by linda_rettstatt at 9:37 PM 18 comments: