Reaching a Milestone in the Midst of a Pandemic

Yesterday, I hit a milestone. I published novel #30. Normally, this would be a cause for celebration. Well, in fact, it is cause. Unfortunately we live now in the midst of a deadly pandemic. A virus that has successfully scared the crap out of me. Still, life goes on and novels are written. But this time begged the question, metaphorically: If a tree falls in the forest and no one hears, does it make a sound?

Would I have invited a lot of people to a book release party? No. Not my style. I would have gone out to dinner with a friend or friends just to at least acknowledge this milestone in my publishing career. But there's this matter of the virus from hell that dictates how we socialize, where we socialize, and how many can gather in one place at one time. And the question hangs like the Sword of Damacles--is it safe out there? I'm not whining. I'm pointing out the challenge of life as usual during this time. There no 'life as usual' right now.

I released my book in the wee hours of the morning of May 24th. It was important for me to do so becaue this book is dedicated to my mom who would have turned 95 that day. I announced the arrival of Running in Place on Facebook. And I so appreciate those family members, friends, and readers who acknowledged the book. Many of whom went to purchase their copy right away.

Running in Place is women's fiction, primarily. Someting I've not written for a while. This particular book has been at least ten years in the writing. It started with a title and a concept.  And, yes, a similarity to where I was in my own life at that time--running in place. The book has taken so many twists and turns and plot shifts over the years. It is a work of frustration, commitment (oddly, a key theme in the book), and of passion. The book deserved a better welcoming into the world than I've been able to give it. And that has been the bigger reminder of the restrictive time in which we live--for now. This time of running in place--working from home, eating at home, spending time at home.

So, I suppose you could say Running in Place is a book for the time. In any case, here's a glimpse. 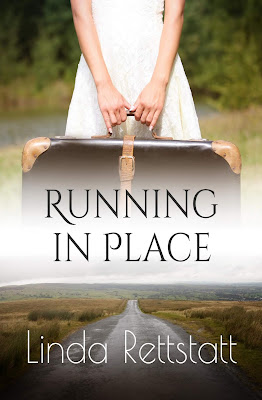 Callie Regan has commitment issues. Everyone seems to see this except Callie. Which, when she comes to the same realization, makes her question her own skills as a therapist. She’s learned that the best way to confront a problem is to keep moving. Permanence has not been a factor in her life. She thinks she’s found the perfect solution for the stability she seeks. Still, she can’t quite say ‘yes.’ The solution—move. And she does. To rural Mississippi. There’s truth in the saying: Wherever you go, there you are. She finds herself once again running in place and going nowhere. And she’s not alone.

She meets others who are, in their own ways, marking time. Billie, a young former runner and Iraq war amputee, who has to learn to walk again. Arcadia, a woman who spent years imprisoned because she put her life on the line out of love. Clinton, isolated because of losses that come with age. Mary Alice, who can’t break free of the beliefs and the fears that hold her captive.

I hope that you all are staying safe during this time. I hope you're finding creative ways to fill the time, and that you have the resources you need to sustain you. I hope you find little ways to celebrate the goodness of life and your own achievements. Stay strong. Embrace life. Say yes to the possibilites and dreams.
Posted by linda_rettstatt at 10:49 PM No comments: