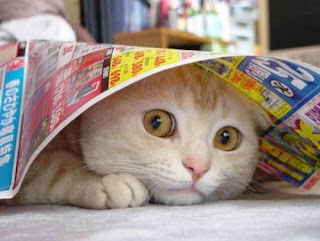 No, I'm not getting married. I'm getting a cat. After months of consideration, I am taking the plunge into pseudo-parenthood. At first, the idea of having a cat around was all about my needs. I would have company. Someone--or something--would (hopefully)greet me and be happy to see me come through the door at the end of the day. I say 'hopefully' because I have had enough experience with cats to know that some of them live with you--and others let you live with them.

I found Minnie (whose name will probably change once I see her personality a bit more) at a shelter. I was looking for a younger cat with lots of energy. Or so I thought until I'd visited three shelters. The energetic kittens and younger cats were yowling and swiping at me through the doors of their cages. Then I saw six-year-old Minnie. She was crouched in her cage, her eyes wide as she watched the goings on around her. But I passed her by to scratch the ears of a curious tabby in the next cage.

Minnie stayed on my mind all weekend, however. Her story of being sacrificed by her former owner explained the frightened look in her eyes. She'd gone from a home she'd lived in for six years to--well--jail. I returned to the shelter to take a closer look at her. She trembled at first when the shelter attendant placed her in my arms. With no front claws, she pawed frantically at my shoulder until I soothed her.

When she was put down to roam free, she found first one hiding place on a book shelf, then an even better spot behind the computer tower under the attendant's desk. But when the attendant reached back to coax her from behind the desk, Minnie allowed herself to be pulled from her spot without complaint--no hiss or meow. And when I once again held her, she rubbed her face against my chin and my hand, claiming me as hers.

While I prepare for Minnie's arrival next Monday, I find I'm both anxious and excited. And the anxiety is curious to me. I think I've realized that this isn't just about my needs. It's a commitment to Minnie (or whomever she will become), too.

You know, Minnie could make me a better writer with that lesson. I fully expect she'll make me a better person. Once I have her settled at home, I'll post her picture, if I can get the shy girl to step out of the shadows and pose for a minute.

I have to say that visiting the animal shelters was wrenching. There are so many helpless animals in need of good homes. If you're considering a pet, please consider adopting from a shelter. You might be lucky enough to find the next Minnie.

Linda
Posted by linda_rettstatt at 6:26 PM No comments:

COMING IN SEPTEMBER: The Restoration of Abby Walker 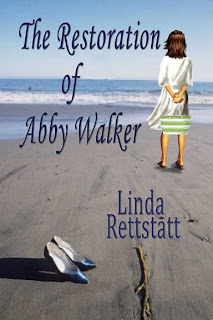 I just signed a contract with Wings ePress, Inc. to publish my women's fiction novel, THE RESTORATION OF ABBY WALKER. The book will be available in September.

Here is a short synopsis to whet your appetite:

Abigail Walker Mulgrew married into one of the wealthiest families in Baltimore society. Her daughter, Caitlin, is in graduate school in California, and Abby is preparing to celebrate her twenty-fifth wedding anniversary with her husband, Wil, on a cruise through Alaska’s inner passage. Abby is determined to use this time alone with Wil to bridge the chasm that has gradually widened between them.

The last thing Abby expects as an anniversary gift is the news she receives from her husband. It propels her into a tailspin that drops her down in an Ocean City, Maryland B&B. Abby faces several changes, among them the opportunity to open the antiques business she has always wanted to own.

As Abby learns more about refinishing and restoring furniture, she begins her own process of restoration, reclaiming the woman she thought she would one day become.

If you need a summer read to carry you through, check out my books at http://www.wings-press.com/Author%20Pages/Author%20-%20Linda%20Rettstatt.htm or read excerpts and reviews and find buy links on my website at http://www.geocities.com/lindarettstatt


Linda (who is perfecting her Happy Dance from a recliner beneath her laptop :)
Posted by linda_rettstatt at 4:46 PM No comments: