I awoke this morning and, once my vision focused, gazed across the room at the framed photograph on the far wall. It’s a picture I took when I was more engaged in outdoor photography some years ago. I captured the sunset off Norfolk Harbor (Virginia) while on a dinner cruise. And I experienced a flashback to an arts and crafts fair where I had set up a booth to sell my matted photo prints.

A man came by and flipped through the selections, holding up the print of the sunset. He studied it for a moment and then asked, “May I say something about this photograph?”

“Sure,” I said. He then went on to tell me everything that I’d done wrong in shooting that photo—the horizon is almost dead center and, according to my self-appointed critic, you never center the horizon. (I knew that rule.) You never shoot directly into the sun because you will get sun spots. (I knew that rule, too). The picture is bland because there is not much variation in colors—it’s all orange and brown. (I could see that.)

“I hope you don’t mind, but I’ve studied photography and just want to be helpful,” he said.

“Thank you," I said, "but I actually love this picture.”

When I look at this picture, I don’t see a photo of the sunset over the water, with the horizon almost dead center (violating some precious rule). I see a variation in color and tone and shading. I see the orange stream of light the sun sends across the water and pulls the photo together. I see the beauty that can be captured by daring to step outside the bounds of ‘the rules.’ This picture greets me every morning, like a kiss from God. 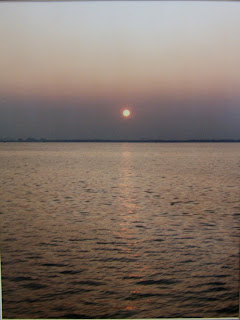 Was I irritated by his presumption? Yes. Did I let his ‘suggestions’ change the way I approached photography? No. One might ask, "Why not?" After all, he studied the rules.

I used to always meticulously color inside the lines. And I rarely ever had purple grass or a green sun or an orange apple in any of the heavily outlined pictures in my childhood coloring books. Every color was as it should have been and nothing breached the boundary lines on the picture.

As I learned the rules for life, I approached them much the same way. Whose rules? Well, those of my parents, my teachers, my culture. But one day when I was in my twenties, something amazing happened. A friend invited me outside the lines—and I dared to accept. Wow—there was a whole new world out there. A world where I could be creative and innovative and paint in any colors I wanted. And nothing bad happened. Good things actually happened. I was filled a new energy and passion.

I’m not talking legal lines here. (Well, not for the most part. It was the seventies.) I’m talking music, photography, and the inner freedom that comes with experimenting and bending the ‘rules’ and daring to create something new. Even becoming something new. A musician friend, when hearing a composition I’d finished, said, “You don’t want to end a song on a minor chord.” I said, “But that’s where this song ends.” And it did, and it worked. For me. It turned out to be the favorite song of many on the ensuing recording that included my music and hers.

When I began to write novels, I was fortunate enough to not know all the rules involved. I knew rules for spelling, grammar, and punctuation, of course. But none of the rules of plot development, characterization, point of view… I just wrote. I wrote what I felt in my heart, what I heard in my head, and what spilled out from this new passion I’d discovered. Writing. That first book finaled for an award, as have two others since. But that's not the point. It's not about gaining awards. It's about the deep satisfaction that comes from the creative process.

This morning as I stared at the imperfect photograph of the sunset on Norfolk Harbor, several threads of a tapestry wove together. That gravitational pull I felt years ago to step outside the lines and give my creative passion free reign. The daring to compose music that came from my soul and may have stretched the boundaries of the rules of composition. And it all culminated in my eighth published novel, Shooting Into the Sun.

﻿﻿I’ve known this book is my favorite (don’t tell the other kids), but I’ve not been certain why that is. Now I’m certain. Because in that book, I have bared my own struggle in Rylee’s journey to get free of her self-constructed boundaries. And in Rylee’s coming to terms with the way her choices have kept her safe and her life orderly, she is free to color outside those lines and create something new. And, when she does, she is surprised to find that the world doesn’t end.

We don’t usually come to terms with these issues in our twenties or even our thirties. We’re generally too busy living life and still building the life we desire. But, if we’re lucky, at some point (and this often occurs for women when we hit forty-five and older) we feel that tug toward something more, something deeper within ourselves. And if we’re smart, we go with it. 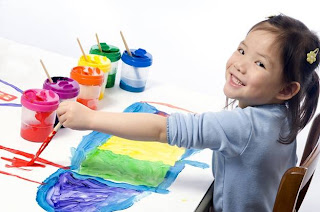 Embrace your passion to be creative!

Linda
Posted by linda_rettstatt at 11:30 AM

Well expressed, Linda. You're right on the mark from learning the rules to re-examining the rules. We have to know them to keep the order in our work, but then artists of any stripe should "throw the 'bummers' out!"

That was beautiful... and I love the photo just as it is. It is beautiful!

Rules are only the guidelines for the masses. Individuals who venture into that area of bending or even breaking the rules do find a new world. Thank you so much for conveying that so beautifully!

Love the post, Linda. I'm a big fan of writing what's inside- if I can't feel passionate about what I write, how can I expect anyone else to feel anything at all?

A perspective to treasure, Linda. Rules must be challenged in writing and in life to stimulate creativity. Carol McPhee

Great discussion, Linda. I love people who color outside the lines. The problem, I believe, with us all is even if we want to color outside the lines, they (the lines) are blind spots our brains can't see and even if we think we are, it's probably that we are following the cow paths (brain patterns) that best served us to survive since we were little. Not a bad thing - just the game for creative people, in particular, authors--to find a way to break outside of the lines we don't see constraining us.

I adore your photo. Its both serene and beautiful.
And I really have to question someone that couldn't see the beauty.