I had a crush on Merrill Osmond of the Osmond Brothers and would write stories about me going on adventures with his brothers. I was maybe 14. I think now it might be considered YA erotica cuz there was some hand-holding and serious kissing going on. Before that, I was inspired by the movie, Oliver, and wrote my own version. I recall showing my story to my father, an educator for our local school system, and he helped me revise the opening paragraph. I’d used the word ragamuffins. He used the word, tatterdemalion. Whatta word! I was hooked! A whole new world of words opened up for me. I actually read the dictionary like a novel, soaking up words and meanings. As a result, I now have little trouble coming up with the right word off the top of my head. I wrote constantly throughout my teens, abandoning dear Merrill to explore other romantical-type stories. I read a lot of Barbara Cartland back then.

I enjoy layering. Twisting a simple plot into so many curves, searching for the surprise to keep my reader entertained. It takes a lot to entertain me, so I use my high bar to push myself, always looking for the unexpected or the quirky. I love exploring characters, their goals, their flaws, their secrets that I am often not aware of until the end of perhaps the second draft. What do I dread? Letting go. Giving my precious baby to a critique group, a reader, an editor… I want feedback, I value honest opinion. And I don’t argue if I’m told something isn’t working. I’m aware that as a writer I’m too close to my WIP to see its flaws, so feedback is essential to my growth as a writer. But still, sending my baby off into the cold cruel world is emotional.

What author has most influenced or inspired you?

Lilian Jackson Braun who penned “The Cat Who…”. cozy mystery series centered around the life of former newspaper reporter, James Qwilleran, and his two Siamese cats, KoKo and Yum Yum, in the fictitious small town of Pickax located in Moose County “400 miles north of everywhere.” Her humor, love of cats, and the town of quirky characters spoke to me like no other book series out there. She was also a fellow Michigander, and was a reporter for my home town newspaper. She passed on this year at age 97, but she wrote right up until the end. I’m in deep mourning, not only for her passing, but also for the passing of all of her beloved characters. She wrote 29 books. That’s how long I’ve been her fan, so I feel like I’ve lost a loved one from my own family.

Can you tell us a little about your book?

Inspired by Ms. Braun’s small-town quirkiness, as well as the movie, Overboard, and Northern Exposure, the 90’s TV series, I wrote Southern Exposure, the story of a runaway bride from a wealthy, but dysfunctional family, and a single-father mayor of a small Georgia town sliding into the ooze of financial oblivion. I love quirky, and I love to laugh. So I did my usual plot-twisting and brought in Junior Upchurch, a behemoth pig whose scent lures unsuspecting chickens to their death when they follow Junior home to his owner, who has a take-out fried chicken shack. The heroine, Kat Hubbard, ends up in jail with Junior when he’s arrested. I’m notorious for falling in love with my secondary characters, so I had to sit on Mayor Dean Mickler’s seven-year-old daughter, Stevie, who threatened to take over the book. The scenes between motherless Stevie, who is bent on destroying Kat, and Kat, who knows next to nothing about children, are my favorite. I’m also pretty proud of the cover. I shot the photo of the red bra and jelly beans, and the shadow cleavage was just pure serendipity. Unfortunately some think the red bra means the story is erotica. Not for all the moon pies in Georgia! My mother-in-law was gonna read my book, not to mention my daddy! Southern Exposure was a finalist for a 2009 EPIC eBooks Award.

I love fairytales, and I love cozy mysteries, and I love Christmas. So I’ve spent the time since Southern Exposure’s debut working to combine all three into another character-driven, plot-twisting, laugh-out-loud story, which I hope will be the first book in a series. I get emotionally attached to my character people, and I hate to say goodbye. Writing a series makes sense for me.

My author website is http://www.kimberley-dehn.com/. I published Southern Exposure under Kimberley Dehn, my mom’s maiden name to honor her, as she passed away at age 42. For future books I will use Kimberley Koz. My name is Kozlowski, but a lot of people see the Z and the SKI and freak that it’s unpronounceable.
Writers are told to write what they know, and write what they can’t shut up about. Well, just about every writer has a blog about the writing process. I can’t compete to any degree, so instead I blog about what I can’t shut up about: Cats! I’ve rescued strays for 25+ years. I’m currently feline beck and call girl to six indoor cats, one who 20 years old. I have several outdoor ex-strays, too. Plus a group of raccoons that have made my yard their home for the past six years. This summer I rescued a deaf and blind baby raccoon (named Helen, naturally). I blogged about her, too. So follow me at Kept by Cats: Writer Interrupted at http://keptbycats.blogspot.com/.

Also https://twitter.com/Keptbycats since I really can’t shut up about my cats.

Recently my cat, Herman, got a Twitter account https://twitter.com/TattleCat and he’s kicking my butt with Followers. Apparently he has more to say to his Anipals than I do to my writer friends. It’s so embarrassing. 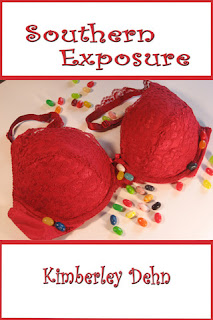 Publisher page for Southern Exposure is:

Thanks so much, Kim, for visiting One Woman's Write. And, readers, Southern Exposure is one of the funniest romances you will ever read. You'll fall in love with the characters--even Junior the pig.  Linda
Posted by linda_rettstatt at 11:39 PM

I've read some of "The Cat Who" books! Very fun.