Misa Buckley in the Author Spotlight


1.  Please tell us a little about yourself.

I’m a married mum of five, living in . That’s about as interesting as it gets, heh. I’m a huge fan of sci fi and Steampunk. I also like knitting. I have a mad dog, two budgerigars and a motorcycle that I can’t ride yet.

2. Every author I’ve met has their own unique story of how they found their way into writing. What path led you to become an author?

I started out as a fan fiction writer, with no particular urge to be published. I’m aware many authors look down on fan fic, but it was how I learnt to write… and to understand how feedback makes one a good writer. It also gave me the confidence to share my stories, without which I might not have been so quick to submit my first novella.

The switch from fan to original fiction came in 2007, when I tried NaNoWriMo. I failed to reach 50K, but discovered that I could invent my own worlds and characters. Though that story is still in progress, I now have three novellas published and am working on more.

Beginnings – I love the shininess of a brand new story. I also love worldbuilding and creating characters.

I really dislike middles. That’s where it gets hard and where new plot bunnies pop up in an attempt to distract me. One of the reasons that I asked my publisher to give me deadlines on several WIPs was to top from dropping one story for the next.

I’m a total pantser. My “plotting” tends to consist of a quick, back-page-blurb type affair (sometimes not even that) and a handful of scenes played out in my head. I frequently have no idea of where the story will take me next, so it’s as much a journey of discovery for me as it is for the reader. I like that J

My writing space… I bought a desk. It’s covered in clothes. I have my spot on the couch and write on my laptop. As for the kids – well, that’s what headphones were invented for.

5.  Which author has most influenced or inspired you?

Oh good grief, where do I begin? Every author I read influences me to a degree. I envy L.A Witt’s prolificacy. Guy Gavriel Kay’s worldbuilding leaves me in awe. I’ve read Adams and Pratchett, Tolkien and Astimov, Eddings and Austin. I think the Belgarion was the first series to inspire me, though I’ve still not written that Epic Fantasy I dreamt of when I was a teen.

6.  Of all of your published books, which one story or character is your favorite and why?

All? LOL. Um, I’d have to say Lucian, from IRONHAVEN, simply because that was my first published novella.
7.  Would you tell us a little about your latest book?

ELEANOR’S HEART is a paranormal romance. It’s the book I always said I’d never write, as it involves vampires and I swore off that particular bandwagon. However, I needed to write a Steampunk story set in winter and one thing led to another. Though is not our average vampire (don’t worry – he doesn’t sparkle) 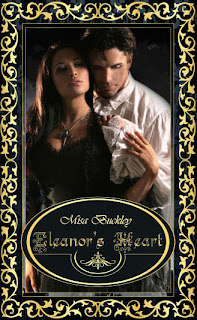 The official blurb: Dying of a rare blood disease, Eleanor Franklin needs laudanum to ease the pain, often driven to steal in order to buy more. But when she steals a ruby she has no idea that the gem will tip her into the midst of a deadly species war.

Saved by , she discovers a man with an even darker past than her own: he is one of the last true Vampires fighting to stop the eradication of his kind.

But the Sanguine aren’t the only problem as Eleanor finds herself falling in love with . It is a relationship she cannot commit to, as she knows her time is limited, and she will not risk breaking his heart.

8.  What can readers expect in the coming months? What are you working on now?

I have two more novellas contracted with Champagne Books – TIN CAT, out March 2012, and BAYNE, out May 2013. Both are science fiction romances, though very different in tone.

9.  What interview question have you never been asked that you’re dying to answer?

See, this is where actually having a life would come in handy, because then I’d be able to share how I climbed such-and-such mountain or sailed a million oceans. However, I don’t have a life and absolutely nothing of interest to share. Sorry bout that.

My website and blog is www.misabuckley.com which is where the details of all my stories can be found. I’m on Twitter (https://twitter.com/MisaBuckley) a LOT, so you can find me there if you want to chat J

Thanks so much, Misa, for being here this week.
Posted by linda_rettstatt at 12:21 AM

Very fun I could actually hear the accent in the writing. Five kids huh, when do you have time to do anything other?

Misa,
That was such an awesome interview. I can't believe you have five kids and write so much! I'm going to try the head phones trick, lol!
J.A. Garland

Great to read more about you, Misa - I'm up in Scotland!