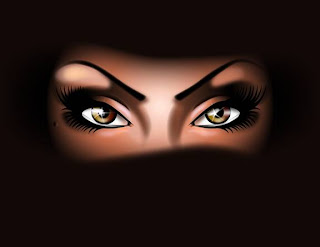 According to Sue Grafton in her Alphabet Series, it is for Malice, but it appears to be for money. As she works her way through the alphabet hungry fans await her next novel and her next and …What will she do when she finishes the alphabet? That's only twenty-six novels. Surely she has more than those in her idea file?

Will Grafton switch like Janet Evanovich and begin another series while she's immersed in her alphabet series. The numbers game for Evanovich certainly could go on longer than the alphabet, but she's preparing a new path in case Stephanie Plum or one of her other characters leaves her high and dry or fans tire of her mis-adventures.

Series authors are faced with a myriad of interesting choices. When Sir Arthur Conan Doyle tried to murder off Hercule Poirot, because he was tired of writing him, he was inundated by furious fans complaints. "How dare he?" Apparently, fans rule and he brought Hercule back from the edge. As an author you have to judge if you have the passion to carry one with your much loved character or like the famed Quarterback – Bret Favre—hang it up while fans still care.

Careers, accidental sleuths are two of my choices. Like numbers they could go on forever. M is for murder. When M is for Mystery, mayhem, and money, but Money Isn't Everything, as CNA (Certified Nursing Assistant) Mary March discovers in one of my mystery novels by the same name.

Exploring characters brings me to career choices, which brings me to who this character might need to help out of a bad situation…sometimes it's the protagonist's own problem, but not always. In the modern mystery M is usually for murder. The why could be greed, revenge, or something esoteric as an imagined affront, perhaps.

Another prolific author who doesn't really write series, but utilizes the same main characters for protagonist and helpers for every case—except villain and victims she connects her stories by the 'body' of evidence, literally. Patricia Cornwell uses the human body of the victim or victims and what a villain could leave behind. She peels away the layers of evidence like a cook peeling apart a head of cabbage for cabbage roll ups (pigs in the blanket to some) one leaf/layer at a time. Still in every one of her novels M equals murder. Albeit, of a different sort with a myriad of different clues. Who could have guessed your body could reveal so much about you in life and in death.

M is for "Murder She Wrote," Jessica Fletcher, aka, Angela Lansbury, similarly, never tells the same tale twice, but always through her sleuth—the endearing Ms. Fletcher with her helpers such as the Doc or the Sheriff, but, nonetheless, different. Did you know her books, also titled Murder She Wrote, are authored by—not Angela Lansbury as you might expect, but Jessica Fletcher. Why? Name recognition perhaps. When fans from her television series look for her books they think Jessica not Angela.

When we think of Patricia Cornwell we may think of Kay Scarpetta, but not necessarily expect her to be an author as she plays a forensic pathologist where Jessica Fletcher plays author/teacher. Surely, when we think "Rizzoli and Isles," the television show, we don't think of Tess Gerritsen and Lisa Gardner though they are the authors who created them.

The mystery is a different sort of venue for an author. Name recognition could easily be for the character rather than author. It could even be the cat from The Cat Who…series by Lillian Jackson Braun, who at 95, penned her latest The Cat Who Had 60 Whisker's, and seems to be losing her fan base. Is it time for her to give up the craft they question…I say if she is still writing at 95 then her books are a collector's item and a tribute to her spunk and rectitude. Amazon is promoting her next book to be published in the year 2025. That's seventeen years from now and you can pre-order it. Would anyone? Will Braun be writing it or one of her relatives? As with the Light In The Attic Series – by VC Andrews, the stories never were as good, never kept the fan base VC originally collected. The question will always be, will the next be as good as the original author's without her/his input?

I doubt the next well-knit project of Debbie McComber would face similar dissention, but you never know, because M certainly is for mystery when it comes to fan based loyalty. Mystery writers deal with a very quixotic population. Intelligent and discerning, they want a good mystery whether it's about murder or myth. 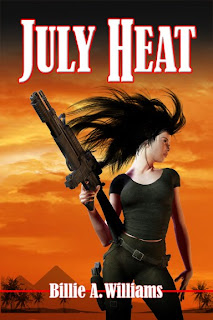 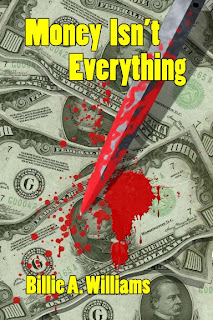 
Billie A Williams is author of July Heat available March 1, 2011 and an award-winning, multi-published, author of more than 30 mystery and suspense novels. She also writes poetry and non-fiction. She has four highly acclaimed non-fiction books on the art and craft of writing creatively, and will soon have one on writing the mystery (Whodunit? A Mystery Writer's Primer) available for purchase. Find out more about the author, join her unique Mystery Novel of the Month Book Club or take her 10-week writing class on line, by going to her websites at http://www.billiewilliams.com/ or http://writingwide.com/
Posted by linda_rettstatt at 9:30 PM

Really enjoyed your post, Billie - I love all those authors/series you mentioned. But I'm sure it's an oversight and you meant to type Sherlock Holmes (instead of Hercule Poirot)!

thanks for the inquiry. Mystery/Murder/Mayhem/Malice - so many M words. Love all that delicious stuff. Thanks again for posting -
lynnromaine.com

Thank you both for your kind comments - as for Sherlock Holmes vs Hercule Poirot -- only the "Shadow Knows" for sure what lurks in the hearts and minds of writers - was it a mistake or was it a....your turn.
LOL
Billie

I discovered mysteries with my first The Cat Who...by Lilian Jackson Braun. I heard "60 Whiskers" would be her final book, so I'm surprised to learn there is another scheduled so far into the future. I am in the process of re-reading the entire Cat Who series non-stop to appreciate Braun's whit and storytelling technique. If you haven't read her books, run...don't walk...

Ha, I like that, Billie - was it deliberate? To see who's paying attention, or were you juxstaposing the characters? It's got me wondering, anyway!
http://romygemmell.blogspot.com

Great post! Thanks, Billie. Loved all the references, most of which I've read.

Finally got through. Apparently I was having trouble with my server.
As always, Billie, you manage to inform, intrigue, and generally get the sluggish mind going.
Thanks for a great blog. I thoroughly enjoyed it.
Claudy