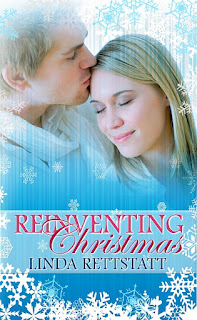 It's almost Thanksgiving and we all know what that means--Christmas is just around the corner. Here's a little excerpt from my sweet contemporary Christmas romance, Reinventing Christmas that will help you get into the mood.

They reached the corner and crossed the street to the neighborhood park. Brady stopped and stared at the undisturbed blanket of white ahead of them.


"Have you ever made snow angels?"


"Sure, years ago. Every kid makes snow angels."


She looked up at him. "You're kidding. What did you do for fun in the winter?"


"We weren't allowed to have fun. We had to study or read. No TV, no playing in the snow. In the summer, I was allowed to use the pool because I was on the swim team in school. I hated swim team, but it got me out of the house. I'm the guy you want to be with if you're on a sinking ship." He tugged on her hand. "Show me."


"Seriously?" She stepped into the snow and turned around. "Come on. Give me your hand."


He complied, taking a spot beside her. Even in gloves, her hand fit snugly into his. It felt natural.


She let go of his hand. "Okay, move over a few feet so you have room to make wings. On the count of three…fall backward. One, two, three." She dropped back into the snow. "Now sweep your arms up and down."


The snow bunched under Brady's collar, sending a chill through him. But he laughed and glanced sideways to watch M.J. make her angel's wings, then followed suit.


"Now, here's the important part. You have to get up without messing up your angel." She sat up, squatted and stood, finally stepping forward out of the imprint she had left in the snow. She reached a hand down to Brady.


He sat up and dug in his heels as she pulled. Her tug on his arm along with his own momentum launched him forward, right into her. He grabbed her shoulders to keep her from falling backward. Their bodies clashed from knees to chest. "Sorry."


He brushed snow from her hair. "A real live snow angel."


She stood staring up at him, her lips slightly parted, puffs of air escaping her mouth.


Lips, soft and full, invited him. He lowered his face to brush his mouth over hers. She pulled back ever so slightly, but then surprised him by leaning into the kiss. He drew her closer, arms encircling her. She yielded to his embrace, sliding her arms inside his jacket and around his waist.


When the kiss ended, he continued to hold her. She remained with her cheek on his chest for a moment before stepping back. "So, um…now you know how to make a snow angel."
* * *
Available in e-book and trade paperback at Champagne Books, also at Amazon.com and B&N.com
Posted by linda_rettstatt at 9:35 AM