This week, I'm very pleased to introduce you to author Joyce Proell and her debut novel Eliza.

Thanks so much for inviting me to One Woman’s Write. It’s a pleasure to be here today.

Please tell us a little about yourself.

I grew up in and went to college and grad school in where I studied psychology and social work. I worked in the field of mental health as a psychiatric social worker, administrator and later settled into private practice. Retired at a reasonably young age, I write full time. After living some years in Nevada and Wisconsin, my husband—a man who always makes me laugh, and I live in rural Minnesota only miles from where I grew up.

Unlike most authors, it never occurred to me to write for publication. But facing burnout from the stressful aspects of working in mental health, I wanted a break. When my husband suggested I take a year off and write a book, I jumped at the chance.
Never looking back, I quit my job and started a new one. At eight o’clock each morning, Monday through Friday, I sit down at my computer to write. What fun! Within a year, and in total isolation, I’d crafted a rip-roaring historical romance filled with pirates, kidnapping, a sexy, wonderful hero, nasty villains and torrid love scenes. Excited and scared, I sent out half a dozen queries and a full manuscript. Weeks later, all the responses came back with a heartbreaking no.
For a day, I roamed around the house stunned and disappointed then I got back to work. I reached out to other writers, joined Romance Writers of America, found a critique group, and started a second book. Eliza is that book.

I adore creating character profiles. Maybe it’s the therapist in me, but I love to craft a character’s inner conflict, quirks, strengths and pitfalls. I want to know every little thing about them.
The most dreaded aspect of writing for publication is condensing the essence of the story to a three sentence pitch or a one sentence logline. It takes a skilled and talented writer to craft a pitch that will hook the reader.

Are you a plotter or a pantser? Describe your writing space.

My first book was the result of a pantser style of freeform writing. It was great fun but what a nightmare to edit. The experience taught me I need order. My creative spirit is freer and my mind is clearer when the space around me is simple, orderly and calm. And I like a road map, a progression of ordered steps, which leads me to the end of the story.

Of all of your published books, which one story or character is your favorite and why?

Eliza is my first published book. The resilience and courage of the character, Eliza, resonates with me. Her story is hopeful and inspiring. It’s an enormous challenge to leave behind everything you know to set up a new life, alone, in a new world. This is especially tricky for a woman in 1859. Yet Eliza pushes ahead, tackling one daunting obstacle after another, and grows because of it.

Would you tell us a little about your latest book?

Here is the book jacket for Eliza:
A husband who wants you dead is the greatest motivation for change.

Posing as a widow, strong-willed Eliza Danton flees her loveless marriage determined to bury the past and live a solitary life. Traveling by riverboat to the frontier, her flight turns perilous when forces threaten to expose her deception. With problems mounting and her trust shattered, she is forced draw upon her only resource, a man whose captivating presence rocks the very foundation of her well laid plans. But love flourishes in the toughest of times even when you don’t want it.

Attorney and contented loner, Will Heaton hides his tender heart behind an elusive facade. Grief is nothing new to him having lost a wife and child. But when a pretty widow thrusts a baby into his arms, he’s hooked. When Eliza is harassed by the same man he believes killed his wife, Will grabs at the chance to redress past mistakes and vows to keep her safe. 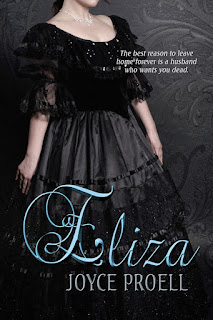 What can readers expect in the coming months?

A Deadly Truth, a romantic mystery set in 1880’s , is set for publication by Champagne Books in July, 2013. Here’s the teaser:

When Doyle Flanagan finds two strangers in his library—one dead and the other the beautiful but meddlesome Cady Delafield, his life begins to unravel as all clues point to him for the murder. As the sexual tension sizzles and Victorian conventions crumble, Cady risks job, reputation and family ties to help him clear his name. Even as his life hangs in the balance, his passion for her drives him on, but will the truth about him be the one thing to scare her away?

What are you working on now?

I’m rewriting my first book. The story has changed so much it’s almost a completely different plot.

What interview question have you never been asked that you’re dying to answer?

What an interesting question? I can’t think of an answer. How boring is that? Guess I’ll throw it out there…Does anybody have a question they’d like to ask me?

You can find me at www.joyceproell.com.
Also, I'm on Facebook @ www.facebook.com/JoyceProellAuthor. Stop by and visit. I often discuss books and love to hear some of your favorites.
Posted by linda_rettstatt at 7:20 PM

For someone who hates loglines, I think you did a spectacular job! Looking forward to reading Eliza.

Eliza is a fantastic book! Eliza is such a strong character and Joyce writes a beautiful story and takes you on a journey back in time. As a writer, although I know my characters, I find that sometimes they take themselves and the story in another direction. My question is: Do you ever feel you get to know your character too well, that they can't tell you their story?

Sounds great! I love characters with quirks & flaws too.

I do hate comiong up with loglines, taglines and writing pitches. They are the worst things to write. I'll take the synopsis over these little diddies.