A Big Thank You and Lessons Learned

Even before I became an writer, there were a number of authors whose work I admired and read faithfully. Not only did those authors give me hours of entertainment, take me away from the mundane or stressful but, once I began to write, they gave me something to shoot for. The authors are in my adulthood what The Lone Ranger (I know, I'm dating myself), and later the Beatles, and Peter, Paul & Mary were in youth--my heroes.

A few of my current literary heroes (heroines?) are Elizabeth Berg, Lisa Scottoline, Claire Cook, Sherryl Woods, Elin Hilderbrand, Susan Elizabeth Phillips, Susan Wiggs, and Kris Radish. When my women's fiction novel, Unconditional, was being prepared for release last month, I had the fleeting thought, "Wouldn't it be great if one of my favorite authors, like Kris Radish, would give me a quote for my book?" After dancing around the idea for days, I decided to go for it. Ask. And, so, I contacted Kris and phrased my request to include every possible way for her to graciously say, "No." I was awestruck when she responded that yes, she would be happy to read my book and give me a quote. I was more anxious about that than I'd been about asking in the first place. What if she didn't like the book? What if she simply unfriended me on Facebook and hoped I went away? What if I made a fool of myself?

We can kill ourselves with 'what ifs' and worries. I had to ask myself if I really believed in my book, if I truly thought the book was worthy for my readers. Yes, I did and I do. So why all the doubt about having Kris read my book?

Because we fail to see ourselves as worthy in comparison to those we admire and put on a pedestal. And there are those who would enjoy that pedestal and use it for their own advantage to feel superior.

Kris Radish is not one of those people. I should have known that after having read her books. Because only a writer with a big heart could write the stories and create the characters she creates. Only a writer secure in herself and her work would be so openly generous. Only a writer with a big heart--a best selling author--would so easily say yes to a request from a fellow (and relatively unknown) author and then produce an insightful quote for her book. 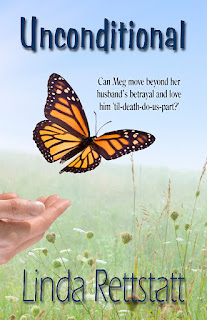 "Unconditional is an important story about love, redemption, family and the amazing power of forgiveness. The heart and love can expand endlessly and these characters are setting the pace."

Kris Radish
Bestselling Author of A Grand Day to Get Lost

Now, how cool is that? When an author gives your book a quote or review, she's putting her name on your work, telling others it's worthy of her name. That's a risk for an author to take. I've learned a few things from this experience. The first is that, if you don't ask, you don't know and nothing will happen. The second is to never assume the worst. Just go for it. The third is to remember the kindness if/when you are in the position of being asked to give a fellow writer a quote or review.

If you haven't read any of Kris Radish's work, get moving. Check out Kris's web site and books here: http://www.krisradish.com/  You won't be disappointed.

Posted by linda_rettstatt at 10:38 PM