J.M. Kelley - How I Became A Writer 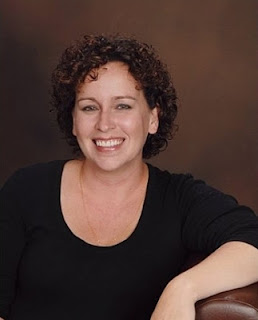 
How I became a writer….that’s a convoluted story. Like most writers, the origin is rooted in reading. As a child, I was obsessed with reading. I remember craving new stories to read, so much so that I’d get in trouble at school for getting my mitts on the reading material for the year and chewing through it in a week’s time. I’d read on roller skates, and in the bathtub (ruining so many good books). I read when I walked, and when I should be sleeping. Reading could cause injury, it was that necessary to have a book in hand.
Along the way, I started crafting alternate storylines in my head. What if Laura Ingalls did this? What if Fudge did that? Sometimes I’d write out shaky and unsophisticated stories involving characters I couldn’t get enough of, and I loved trying to envision those fresh scenarios.
I like to claim that my first published work was a story I wrote in kindergarten or first grade. Our town’s newspaper had a weekly feature in which local students submitted, via their schools, original stories and assignments. If published, you received a crisp one dollar bill in the mail. My first dollar came when I wrote a fascinating tale of winning the lottery and buying a horse. That was the story. Two lines. When I grow up I will win the lottery. Then I will buy a horse. Compelling, no?
But, that win created a monster. I wanted more dollars! I wanted to see my name in print again! Over the elementary years, I may have seen two or three other so-called stories published in that Junior Dispatch, but I was writing other things.
My worst endeavor was what turned out to be a horrific clone of the Sweet Valley High characters. I might as well have named the twins Belizabeth and Bessica Bakefield, it was that much of a rip-off.
More writing happened as I grew older, but it was secretive and angst-ridden as the middle school and high school experiences turned into the typical wallflower/target-for-all-the-bullies life unfolded. The stories often reflected life on the fringes of school society. There was a moment I thought was glorious when a story I’d written was read in front of my entire lit class. I was proud of it, this assignment we’d been given. The goal was to write a story inspired by Washington Irving’s  The Devil and Tom Walker, and I’d concocted a rather complex story about a mailroom clerk in a Chicago business of some sort, who met the devil. Well, the devil disguised as a taxi driver. He jokingly sells his soul to the devil, aka Mr. Taxi Driver, and wonder of wonders, experiences a meteoric rise in the company. The story ended with the devilish taxi driver and the businessman running into each other in an elevator, and the devil collecting his soul with the push of a button.
The reaction of the classmates? Weeks of relentless mocking, naturally. That was when I began stifling the urge to write, and in time, I’d given up all together. It had become a source of embarrassment, and I didn’t need yet another target drawn on my forehead.
Sad, letting those fools win, huh?
At any rate, let’s fast-forward in time. In 2007, my father passed away after a short but vicious bout of lung cancer. It was emotionally devastating, considering I was still grappling with the truth of our relationship as father and daughter. You know how it is—you don’t know what you’ve got until it’s gone.
I needed an outlet, and I returned to writing short stories, again with the angsty overtones. They were terrible…rusty, adverb-riddled, and full of horrific dialogue tagging. But, it was good for working out the kinks and getting the vibe back. Eventually, I started craving a full-length novel to call my own, and opportunity knocked with a pink slip from my accounting job. I was laid-off. Booted from the business. Kicked to the curb with a piddly severance package, all for the sake of the almighty bottom line.
Without any work to be found, I had all the time in the world to do it, so I finally really, truly buckled down and wrote it. The official thought was, “What the hell do I have to lose now?”
That story was Drew in Blue. It was published in December of 2010. My second novel, Daddy’s Girl, was released in January 2013, and is my official thank you to my father for getting me to chase my dreams at long last. Add to that list Almost Magic, coming this month, and She Let Herself Go, to be released in March of 2014, and I think it’s safe to say the chase is on, with no end in sight. 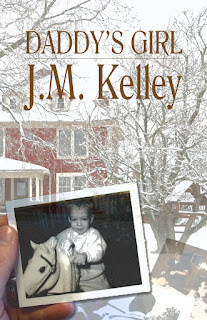 
“Need help?”
Janie turned around and grinned in spite of herself when David appeared from the living room. Her eyes lingered on the red sleeveless cardigan he wore over a crisp white work shirt. “Nice sweater vest,” she said. She held a crumpled bag out to him.
“Thanks,” he said, too brightly to have read the sarcasm in her words, Janie figured. She rolled her eyes and followed him out into the kitchen.
“So, what are you doing here?” She shed her coat and hung it over a chair.
David started unpacking the bags. “Antiques Roadshow. Didn’t your father tell you?”
Janie snorted. “Well, yeah, but I thought he was joking. You guys really sit around and watch that show?”
David stepped aside to grant Janie access when she reached for the boxes of cereal. “It’s intriguing.”
“Oh, yes.” The sarcasm was back. Janie carried her armload to the pantry. “I saw it once. They had an intriguing analysis of a step stool. I’ve never been so moved in all my life.”
“You mock what you do not understand.”
Laughing, Janie walked back to the kitchen table. “So what was the big item of the night?”
David scowled. “A pair of eyeglasses.” He paused. “They had reason to believe they could have belonged to Benjamin Franklin.”
Janie made an O shape with her mouth and fanned her hand at her face. “Be still my heart. I think you should get permission from the doctor before you subject my father to such drama. What’s he doing, anyway?”
Unfazed, David tossed a pear at her. “He’s asleep in his chair.”
“Shocker.” She pulled a bowl from the cabinet and placed the pears inside. “Oh, by the way? I’m mocking what I do understand.”
“Yeah, well, you have your shirt on backwards.” David grinned and folded his arms over his chest as Janie pulled the neck of her shirt out and peered at the tags.
“Crap,” she whispered.

Three years ago, native Pennsylvanian J.M. Kelley packed her bags and moved south. Now, the wannabe Carolina Girl can’t speak a single sentence without adding the word y’all at the end of it, and regards a blast of snow flurries as a doomsday-level event.  When the day job allows, and when she can pull herself away from George Takei’s Facebook fanpage, she likes to go on writing jaunts to her favorite lake, or a local coffee shop with delicious shakes and questionable Wi-Fi connections.

J.M. Kelley is a proud recipient of a Carrie McCray Memorial Literary award, and is a member of The South Carolina Writers Workshop and Romance Writers of America (PAN).

Thanks for having me on the blog, Linda!

Thanks for being here. I love hearing stories of how authors got into writing. Every story is so unique.

Was fun to hear your journey...I can relate to a lot of it.