As we continue your journey through The Writer's Alphabet, we have a discussion on D--for Dialog and Digital Voice Recorders presented by guest blogger, A.J. Maguire.

I'm going to be honest. If I see large hunks of exposition, my eyes sort of skim over it. Not because the writing is bad or anything, a lot of the times there's really great poetry mixed in with the prose, it's just that I want to see the characters in action. Dialog literally is action. It's the basic driving force of your plot and your novel. Dialog doesn't just tell us what's happening, it lets us see it. And it lets us get to know the characters better than any internal monologue ever could. Because it's what a man does that defines him and the same goes for our characters.

You can tell us all you want that Character Bubba is a snarky grump but until he opens his mouth and proves it, it's all a bluff. And I'm not meaning that you sit down and tag his lines with – “Shoulda seen the twit,” Bubba snorted gruffly. I'm not arguing tag lines because when it comes right down to it, nobody really cares about the he said/she said. What they really care about is what was said. It's about content. It's about the voice of your character coming to life on the page. And the only way you're going to get that is if you listen.

Something that helped me with this is a digital voice recorder. (Hence the title of this segment.) Last year for Christmas I bought this little nine dollar voice recorder from a pawn shop with the intentions of practicing reading my work out loud. I had been listening to Scott Sigler's podiobooks and he really inspired me to think outside the box of what I considered a traditional writer. So, I bought the recorder and started recording my rough draft as I was writing it. So at the end of the week, I would sit down and record what I had written. And then, during the rest of the week, I would listen. In my car (preferably when I was alone) or while I was doing dishes (headphones are wonderful assets) and it really helped me to keep my focus.

The unexpected bonus of this little experiment, however, was that I could literally hear where the dialog was wrong. I'd be elbows deep in soap and realize that Bubba would have said something a lot meaner to Mary Sue, not only because he's a snarky grump but because she'd just overheated the ships motor and now they're stuck and, for goodness sake he's still mad at her for blowing up his 20” flat screen TV two chapters ago.

On top of all that, I could hear if the phrases were all wrong for the time period, because we all know that dialog also paints the setting of a novel. There are real language differences that need to be shown in the dialog. You can't go having your 17th Century female say the equivalent of “OK”. It just wouldn't happen and every pettifogger in the world would have your brains on toast if you tried. Dialog has to be a reflection of each individual character and the setting around them. It has to be rife with conflict and personality and give the reader a certain respect for the characters involved. Because if your reader doesn't get involved in what is being said on the page, then they're likely to stop reading. 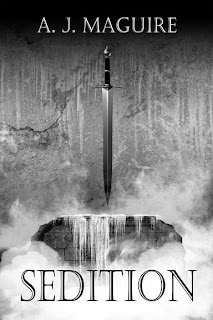 A.J. Maguire's debut novel Sedition is due to be released January 2011 from Wings ePress http://www.wings-press.com/. Her second novel Witch-Born is set for release by Double Dragon Publishing in 2011 http://www.double-dragon-ebooks.com/. She is a proud military veteran and mother of one toddler who unwittingly listens to everything she writes (except the adult parts, she has some morals.) You can view more of her work at http://ajmaguire.webs.com/
Posted by linda_rettstatt at 11:06 PM

Useful advice! And remember not to always put "He said", or "She answered him roughly" and such-like. It interrupts the flow of the dialogue. If you have two people talking, it should be obvious by how they speak and what they say, who is doing the talking. I'm guilty of this, and am trying to break myself of the habit!

It's always an exciting challenge to me to create a 'voice' for each character in such a way that tags aren't even needed. I like to try to bring the reader right into the room with the characters. Not always easy to do, but a good challenge in writing.

Great article. Thanks so much.

Wanted to add also that the idea of using a voice recorder to test your writing is great.

I seldom use the word 'said' because I hate to read it so much. I've never tried using a recorder but I can see its advantage to making a writer listen to her work. Great article! Carol