E is for Editing

This week I welcome author Jim Woods who lends his expertise on the subject of Editing.


WHO’S YOUR EDITOR?
by Jim Woods

There are three stages of editing before publication, with the initial stage, self-editing, being perhaps the most important. Once upon a golden time the gift of story telling, in handwritten script, or composed on old-fashioned typewriter keys, was all that was necessary to sell a story or a book. Someone from the publisher’s editorial staff worked closely with the writer in coaxing the promising tale into publishable form. Those good old days have joined the rest of ancient history.

Nowadays if the writer isn’t also the first-line editor, there may not be another reader. With your manuscript presumably complete, put it away for a week or two, and then read it objectively. Start by eliminating words. You can do it! Line through the words with a colored pen; hit the delete key. Take it out! Examine the copy word-by-word and take out all the words that really don’t have to be there. Sure, this is going to slim down the manuscript; that’s part of what we’re after. Look critically at each adjective. Make sure each of them imparts exactly your intended characteristic to the noun it modifies. Look at all the short, choppy sentences. Combine them. Vary the sentence lengths and patterns. Search out those favorite words you have used twice in the same sentence and four times on every page. Find a different word for ninety percent of them. Rewrite! There is nothing sacred about a first, or second or third draft. None of it is final until it goes to press.

Going to press is pushing the schedule a bit. It’s time to turn the manuscript over to your professional editor. Not your mother who’s an English teacher, and not your daughter who’s a psychology major. Of course you are going to impose on friends and family to read your Great American Novel. Of course they will shower you with accolades. Now seek out a real editor whose expertise and opinions will make your work saleable.

That editor may be a friend, or at least friendly, but more than likely you’ll see him/her as an adversary. It’s not his job to stroke and soothe. You need someone who can get down to the business of editing, unencumbered by personal feeling for the author. Choose wisely, based on the recommendation of other professionals. Once you have come to a professional and financial understanding, accept and act on his advice and criticism.

Review your editor’s corrections, make the ones you agree to or that the editor has convinced you should be made, and once again, re-write. Now, does this mean automatically the publisher of your choice will accept your story or novel without further change? An emphatic No! However, it does mean the publisher may take the time to read the story through simply because it was presented to him professionally in the first place. Let’s assume it is accepted. Now the publisher’s staff editor gets his crack at it.

Your independent editor would not have known which publication or publisher would wind up with your creation. Style guides are decidedly similar, but different publishers and organizations hold differing opinions on word usage and punctuation. As a writer myself, I once was exposed to a company editor whose first “rule” was that the word “albeit” was never to be used--period! Unfair? Dictatorial? Of course. However, to satisfy the editor who authorizes the payment to you, you’ll just have to take out his personal “albeits.” Publishers and Editors do not necessarily adhere to democracy.

That final editor and his staff also will do some fact checking if warranted, and the publisher’s legal expert will vet for libel, plagiarism, privacy invasion and copyright infringement. Finally, the copy editor will check the spelling of every word, even though the author originally employed his computer spell-checker. The author may have a say about substantive changes to his manuscript but is unlikely to get a voice in style and grammatical changes. Editors do not relinquish that control.

One time I sold a short story to a Canadian anthology. I had been thorough with the pre-editing and the story had been passed-on by a second editor. The setting was the southern region of the United States; the language proper for the time and locale. In the publisher’s final editing, two or three of my carefully selected words and phrasings had been Anglicized, an alteration necessary for that publisher’s primarily north-of-the-border market. It may not have destroyed my creation, but certainly sullied my story’s authentic Southern flavor. The editor had the last word, as usual. . . and the editor is always right. 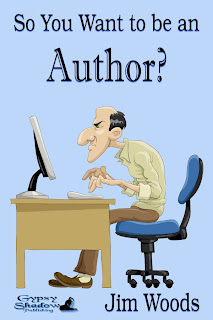 He is author of the writing tutorial, SO YOU WANT TO BE AN AUTHOR?
Gypsy Shadow Publishing: http://www.gypsyshadow.com/

And the fiction works, SHE SERPENT, GUNSHOT ECHOES, and ASSASSINATION SAFARI, Champagne Books: http://www.champagnebooks.com/
Posted by linda_rettstatt at 10:39 AM

Thanks, Jim. I'm up to my elbows in edits right now. I have been working on this story long enough not to see certain problems I need to edit. I solved this by renaming a few characters in order to jar my attention, and it worked. Thanks again.

Yes, Jim, you are certainly right about each editor having their own favorite thing to correct. Some don't like semi-colons, some don't like long sentences; some don't like the word "then" used at all! You just have to roll with it, and hope their suggestions make your work a best-seller...or at least sell a few copies!

Thanks for the interesting post - very timely as I'm just completing the final edit on my first novel.

Well, Jim, I never know where you're going to show up with more wise words. Sorry the final editor made you "kill your darlings." (Stephen King from On Writing.) We know it's for the bes -- usually.