F is for First Person

This week I'm happy to welcome author Karyn Lyndon who shares her thoughts on writing in First Person.


When I selected Good in Bed as my summer beach read in 2001, it wasn’t because I had heard of the author—this was Jennifer Weiner’s debut novel. I also didn’t choose it because of the way it was written. After all, I hadn’t read it yet. It wasn’t the genre, either. I’d never even heard of chick lit. Nor did I pick it because of its cover.

What compelled me to spend $12.95 for that book over all the others? It was the title! Who could resist the promise of a sexy read that the title inferred? As it turned out the book featured very little sex. Good in Bed was the name of the column the main character’s ex-boyfriend wrote about how BAD in bed she was. But as I delved into Weiner’s easy-to-read first person writing style, I didn’t feel duped--it was love at first person!

What did I learn from her book? Well, the most obvious lesson is to spend some effort writing a title that sizzles. But what I really garnered from reading Good in Bed was the knowledge that I didn’t want to write Stephen King-ish horror stories in boring old third person like I’d done with my first attempt at novel writing. I wanted to write funny, contemporary stories where the main character seemed so real, reading the book was more like chatting with your best friend at Starbucks, or sneaking a peek at her diary.

As I read each chapter it felt like Cannie was talking directly to me. She shared the same self-deprecating comments that constantly circled my brain, topics like her less-than-perfect body and other familiar insecurities. The raw emotions, the funny asides, the lifelike twisting of events seemed more like actual anecdotes from the author than from a fictional character.

And I couldn’t wait to try it!

When I first sat down to write CurvyKathy31: Confessions of a Chat-aholic the words seemed to flow easier through my fingers. Not only did I now LOVE reading in first person—I loved writing in it, too. It was easy! And easy has always been my preference.

About half way through my manuscript I joined my local chapter of Romance Writer’s of America. At one of my first meetings the speaker said something that felt like lightening striking my heart. She explained that first person was a harder sell than third person. Harlequin didn’t even accept manuscripts written in first person. Now, while my intention had never been to write a romance novel, the speaker’s words hurt.

What could any editor or agent have against my personal favorite person? Still believing there must be readers out there just like me who couldn’t get enough of “I” pronouns and the acrylic-clear point of view of the main character, I eventually finished my book. On a chick lit email loop we began debating what to rename our Yahoo group. Publisher’s began to ask for light women’s fiction as though uttering the words “chick lit” would steal their souls. (This article seems to have taken a turn toward other letters in the alphabet--like C & L. Sorry. Back to F.)

Undaunted by the obvious prejudice against first person and all things chick lit, I began my second novel, For Richer or Repo. But this time I wanted more of a challenge. Maybe first person was TOO easy. (Nope, no such thing.) So I decided to write the first person book in more than one character’s point of view.

My critique group warned against it, proclaiming it would be too difficult to discern which character was speaking. But that was an easy fix! I just headed each scene with the POV character’s name. Just when I had settled on four characters telling their side of the story, a fifth one popped up wanting to tell his!

Yes, it was more difficult, but writing was never boring. When I felt too fatigued to go on, taking my place inside another character’s head always brought me new inspiration. And I must give credit to my critique group for challenging some of my word choices and keeping them true to each character.

So let’s recap my first person learnings. It’s fun to read, easy to write, harder to sell and I love it!

That’s about it. Oh, and now that memoirs are popular (I heart Jennifer Lancaster’s books) they have become my favorite source of reading material--also in what? FIRST PERSON! 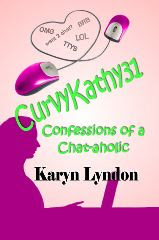 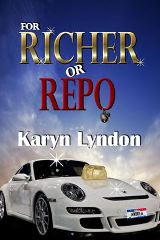 Karyn Lyndon lives with her husband and son in North Texas. She spends her days editing advertising for a major retailer and nights writing humorous, romantic tales. Her debut novel, CurvyKathy31: Confessions of a Chat-aholic, is written in first person from one point of view. For Richer or Repo, her second published novel, is also written in first person but from five different characters points of view.

NOTE: I want to be sure to mention that Karyn's book, CurvyKathy31: Confessions of a Chat-aholic, has finaled for a 2011 EPIC e-Book Award. Good luck, Karyn. (though I should be cautious. We're in the same category. Last year, I congratulated a competitor, and she won!) Linda
Posted by linda_rettstatt at 10:13 PM

Thanks so much for sharing your thoughts on writing in first person. Great article.

And congratulations on finaling for a 2011 EPIC e-book award with CurvyKathy31: Confessions of a Chat-aholic

Thanks for sharing Karyn - I'll check out her books - and thank you, Karyn, for the small essay on POV. I'm experimenting with it - finally settled on 1st person prologue and 3rd person main body of story but I could switch back again.

I recently read GOOD IN BED. It's an enjoyable read and Weiner does well with her first person. It doesn't feel I-centric at all. Thanks for the post.

I've critiqued a few first person stories and have found the authors struggling for alternatives to using the narrowing "I". This could be good in their creative writing development but I'm sure it must be wearing at times. Carol

Thanks, Linda, for the addition of the EPIC award nomination blurb for CurvyKathy. I was surprised it finaled since it's not exactly mainstream. Just like the industry, EPIC is pretending chick lit doesn't exist.

And good luck on the contest, too. If I don't win in the mainstream category...I hope it's you. Wings authors are represented well at EPIC this year!

Thanks Karyn for making me feel a little better about 1st person, which I love. I don't think you can write a real gothic in anything other than first person and that's what I use. A lot of people don't like to read it, but, hey, you're right. It is easy.

Congrats on your EPIC nomination.

Thanks, Allison. I forgot about another one of my first-person faves...Jane Eyre...a MUCH earlier example of chick lit (less than perfect heroine, written in first person, more about the main character's journey and growth than the romance, bittersweet ending...this one even has a married man)

Karen, thanks for the F word insight. I struggle with first person a lot, but your point that it's easy to read makes a so much sense.

Congratualtions on the EPIC nomination.

Karyn, Thanks for the insightful information. It will be fun to give it a try! -Polly

Thanks Polly and the other Anonymous person (they said F word... : )