Greetings everyone, I am Burst Books author, Helen Henderson. Linda has graciously offered to let me post my interview with Lord Branin of the dragshi. Branin's tale is told in the newly-released fantasy novel from Burst Books, Dragon Destiny.

An amber dragon playfully soaring above signals the arrival of my guest. Wind from its wings ripple my hair and send up whirls of dust. A silvery voice that could only have come from the great creature echoed in my head. But the words were not intended for me, but another?

A moment later the dragon landed and flipped his wings along his back. I am Llewlyn. My soul twin Branin will join us shortly, until then if you don’t mind, I’ll visit with you.

Sitting on a rock and pulling pad and pencil from a valise, I swallowed hard. Honored old one Llewlyn, welcome. I’ve never interviewed a dragon before. What should I know?

When some humans are born, more than one soul comes to life. The human, which are called dragshi, have a twinned dragon soul. When the dragon awakens, so does both the human and dragon magic. When I awoke many years ago, Branin acquired the ability of flight. Like the other dragshi, we share one body in space in time and are able to change forms with the other at will. Although the dragon halves don’t interfere in the human world, today I wanted to stretch my wings. So here I am.

It must be great fun to soar amidst the clouds.
It is. Llewlyn’s deep-throated laugh showed a sense of humor. Then his tone took on a somber note. I have learned much from my human soul brother. With ability comes responsibility. The dragshi protect the innocent--man, woman, and child.

Llewlyn, I’ve heard you and Lord Branin are on search. May I know what for?

The mental contact vibrated with tension and a sense of desperation. Branin and I are the last of our kind. We have waited over three hundred years for our mates, but there have been no signs of another dragshi’s birth, let alone that of a female. Branin and I are alone. The true human women whose paths have crossed ours do little to lighten my soul brother’s loneliness. Although the women understood a dragshi can never truly love one of their kind, that we wait for a human female whose soul is twinned to my mate, there is one who refuses to accept the truth. Black eyes glared at me. Lady Broch of Ky’Port means to become Branin’s handfasted mate--with or without his willing cooperation. A low growl came from deep in his the dragon’s throat. I don’t like her.

My reporter instincts leaped onto what the dragon left unspoken. Before I could summon the courage to pursue the question, Llewlyn looked skyward and when he returned his attention to me, the dark sadness seemed to deepen. Soon Branin and I must return to the confining walls of Cloud Eyrie. Thank you for the diversion and if you hear of a girl named Anastasia who can talk to dragons, please let one of the dragshi or a member of the Ceoltier Guild know.

Be assured, honored old one. I will do as you ask.


The dragon disappeared in a white mist. The dark hair and gray eyes of the man who walked out of the concealment fog meant one thing--Lord Branin had returned to his own form.

Greetings Helen. I’m glad the weather broke today so we could take a turn outside. Thank you for humoring Llewlyn. He doesn’t get out much these days, what with the winter winds trapping everyone inside sturdy stone walls. Soon I will escort Crisiant, one of the true dragons, on a long journey. I’m sure she and Llewlyn will have much to talk about.

Branin took a seat on an adjoining rock. Whether it was a lingering after effect of the transformation or Branin himself, but his mere presence overwhelmed. Anger flickered across his face as he glanced at the sky. I’ m sorry to have to cut this short, but I see the ranks of clouds are closing. There is time for one more question.

Lord Branin, Llewlyn said to watch for a girl named Anastasia. Who is she?

A hint of sadness flickered in his eyes. I don’t know.

A white mist surrounded Branin and when it dissipated, the amber wings of Llewlyn’s dragon form towered over me. There seemed but one way to end the interview and I bowed my head. Thank you for the honor of the visit.

It is our pleasure, came back the silvery tone as I covered my eyes against the shower of dust that accompanied the dragon’s takeoff. And the final message sent my heart soaring on dragon wings. Hatchling’s Curse will be told, May 2013.


More of the tale of Lord Branin Llewlyn is told in Dragon Destiny available from Burst Books. Ebook also available at Amazon / OmniLit / DriveThru Fiction with expanded distribution to paperback other ebook platforms later in 2012.

About Helen Henderson: A published author, feature-story writer and correspondent, has also written fiction as long as she could remember. Her heritage reflects the contrasts of her Gemini sign and shows in her writing which crosses genres from historical adventures and westerns to science fiction and fantasy. 's other 2012 release is Windmaster Legacy, the second book in the Windmaster series. A western written under the pen name of her ancestress, Jessie Treon, was released November 2011 in the Dreamspell Goddess Anthology.

Join her on journeys through the stars, back to the past, or among fantasy worlds of the imagination. The trip begins at her website, helenhenderson-author.webs.com or blog. 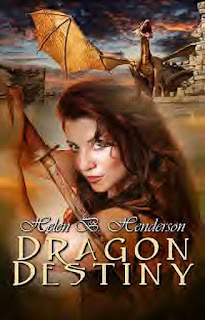 An Excerpt from Dragon Destiny now available from Burst Books

Branin screamed his frustration to the sky. Liam and Dealan had found each other within weeks of their first shift into dragon form. According to the ancient records in the back recesses of Cloud Eyrie, he and Llewlyn had already waited longer for their mates than any other dragshi had ever done. Llewlyn woke more frequently from the shadowed corner of Branin’s mind where he slept and the dragon’s discontent echoed Branin’s own. They were alone and, Branin feared, destined to remain that way forever. Again, he yelled to the winds. However, what echoed back from the ice-covered peaks sounded more like a moan than a dragon’s trumpeting call.
A hint of emotion whispered at the edge of his senses. He could tell the feeling did not come from his fellow dragshi, or, from one of the old dragons. That left only a true human.
The depth of the other’s longing called to him. His own hunger answered. Reaching out with a gentle mental summons, he asked, “Who are you?”
Surprise and astonishment replaced the dark despair Branin first felt from the unknown person.
“Do not be afraid,” Branin encouraged. “Tell me your name.”
No matter how hard he listened, no response answered his question, although Branin detected the low rumble of thought. He curbed his normal instinct to charge forward. Instead, he flew tight circles between the steep cliffs and waited. Three loops turned into four, which stretched into ten. Wet flakes from the approaching storm pelted him. A strong downdraft caught his wings and dropped him several hundred feet. Retreating before the black clouds, he tried one last time.
“Mine is Branin. Your loneliness touched me. Please, what is your name?”
The contact snapped. In the final moment of its existence, a single word whispered into Branin’s mind. “Anastasia.”
.
Dragon Destiny available from Burst Books. Ebook also available at Amazon / OmniLit / DriveThru Fiction with expanded distribution to paperback other ebook platforms later in 2012.
Posted by linda_rettstatt at 11:00 PM

Thanks so much, Helen, for introducing us to Lord Branin. Dragon Destiny sounds like a 'must read.'

And thank you Linda for having me. Even after all my years as a correspondent, interviewing a dragon was a bit of a challenge. My one disappointment, I'm too big for even Llewlyn to carry so I couldn't soar in the clouds. Helen

These characters are too polite to show off their daring sides and defensive natures, so it is up to the reader to take a trip into the tale and enjoy the journey. Carol.

Carol, good point about their actions. However, in Llewlyn's defense, he was trying to be good. No throwing reporters off the cliff. But I want to assure everyone, no matter what his form Lord Branin Llewlyn is a true hero. Helen

January, thanks for stopping by. Helen