How I Became A Writer - Kevin B. Henry

This week, I'm very pleased to welcome Kevin B. Henry, author of Amber Gifts, who will share his story of becoming a writer. 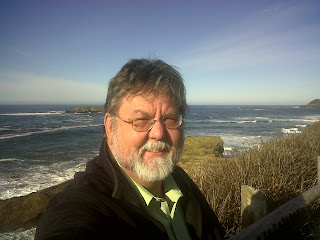 I think I’ve always wanted to be a writer. I was a voracious reader as a child and that trait continued right into adulthood. Most of what I read while growing up was Science Fiction; Heinlein, Clarke, Anthony, and Zelazny, among others. As adulthood approached, I branched out into the Mystery genre. I read a lot of the classics during college, Hammett, Chandler, and through a most curious musical path I discovered John D. MacDonald and his Travis McGee character. I wanted to write stories that combined all of those authors style and in the attempt, I never really could write anything of my own. Most stories started and then lay fallow for years, forgotten or thrown away.

Fast forward thirty years. During a low point in a generally adequate life, I was complaining to myself, regarding how interesting it would be, living during the years just prior to when I was born. It may sound cliché, but I instantly imagined the opening chapter, where a down-on-his-luck man is given a vial that will transport him to another time, before he was born. I realized that this was not a story I had ever read. This was my own idea. I wasn’t trying to be Heinlein or MacDonald or anyone else. I was being myself. I grabbed my laptop and started writing. The rest as they say, is history.

The entire process of creating Amber Gifts took a little over two months. It’s not a long story. I’m not Rowling or Tolstoy. I’m never going to write an 800k word epic. Being a child of the television age, I like to think that I’m writing an episode of some series, maybe a TV movie. Maybe as I grow as a writer my stories will grow as well, but I like the small format, telling a good tale quickly.

I added a lot of the things I enjoy, obscure references, trivia, things you might hear on a typical Jeopardy show. I did as much historical research as I could, mostly over the Internet. I wanted the writing to be accurate, but I also wanted there to be some hint of conspiracy theory or side events that may or may not have actually happened exactly as I told it. I wrote in the style that I have lived my life, I didn’t want the truth to get in the way of a really good story.

While my main character, Mitchell, is male, I wanted to include a strong female character as well. Crystin is a combination of the many people I have met in my life. She is smart, knows her own mind and has skills and talents she is not afraid to use. I really liked writing her and hope the character rings true for readers.

I’ve completed two additional stories in the Amber Gifts universe. The next tale describes what happened to Mitchell during his very first experience in time travel. The third continues the story of Mitchell and Crystin. If you read Amber Gifts you’ll understand that there is a lot more to their story that needs to be told. I’ve submitted the first for publication and will submit the other soon. Hopefully they will be accepted.

I have plans for a fourth story, but I keep getting side tracked with other writing projects and have only done the most basic of outlines. I don’t map out every detail. I like discovering the story as its being written. It may sound strange, but I know how it begins, I know how it ends, but I only have the smallest of ideas what happens in between.

It’s a lot of fun taking someone and throwing them into the past. I hope they’re as much fun to read as they have been to write. 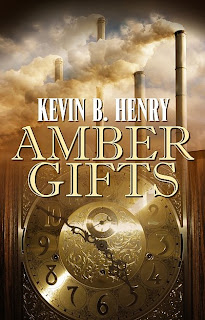 After a decades long downward spiral, Mitchell is at the bottom of life’s rungs. A stranger hands him a simple, amber vial and tells him to drink it. With that one act, he is now a time traveler and when asked to help some new acquaintances, he gladly agrees. A simple request to find some items left scattered throughout time. How hard could it be?

But someone wants to stop Mitchell’s efforts and it will take more than luck for Mitchell to find all the items and survive long enough to complete his mission.

April 26 - Find out how Linda Swift became a writer.
Kevin can be found on the web through the following links:
Amber Gifts/ Amser Chronicle Blog:
http://ambergifts.blogspot.com/

Twitter:
https://twitter.com/Kevin_Henry
*Stop back on April 26 to find out how Linda Swift became a writer.*
Posted by linda_rettstatt at 7:26 PM

I love the history of how it all came to be! I sometimes don't hear that part. And I agree, sometimes those shorter, snappy, adventurous novellas are just what a reader needs. I know I like them.