Holly Gilliatt - How I Became A Writer 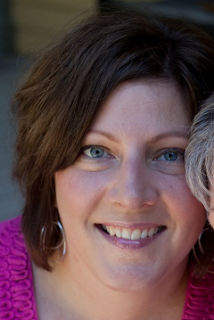 This week I'm very pleased to present author Holly Gilliatt who shares the story of her journey into becoming a writer.

I think I came out of the womb as a writer…I just didn’t understand language yet. But as soon as I learned how to read and found these marvelous things called books, I couldn’t imagine anything better than writing one.

My favorite part of school was when we got to write. They would give us those big, lined pieces of paper with the dotted lines to aid our newly learned handwriting skills, and I was in heaven. While my classmates were content to fill that one page, I would routinely ask for a second or third sheet to finish my story.
When I think the writing bug really got me was in third grade. One of my all-time favorite teachers, Mrs. Woodard, really encouraged writing and we got to do the most exciting school project I’d ever encountered—we actually got to make a book. I remember vividly how we sewed the pages together, picked out the fabric for our cover and ironed it with heat-activated adhesive to the cardboard to stiffen the cover. When it was done, I was in awe. I had made a book! I could hold it in my hands. Others could read it. It was, quite simply, amazing. So I made two more!
I knew what I wanted to do when I grew up. Make real books. The kind I saw and devoured from my weekly trips to the library, when I always picked out six books to take home with me (my mom had to impose a limit or God knows how many I would have lugged home).
In grade school, I won two national writing awards. One was for an essay about Harry Truman, for which my school earned a plaque with Truman’s likeness and my name engraved on it. The other contest was about the Statue of Liberty, and I won a cash award. I think it was twenty-five dollars. I remember thinking how unbelievable it was that someone had paid me to do something I loved so much. What could be better?
When I was twelve, I wrote my first novel and submitted it to a house that published works written by young people. They didn’t publish it, but since they worked with kids, they were kind enough to offer constructive criticism and praise for what was good. They liked a lot of it, and I knew more than ever that I wanted to be published someday.
In high school I was on the newspaper and yearbook staff. Won some national awards for my work, furthering my desire to someday write for a living. I considered becoming a newspaper reporter, but then I figured the crazy hours they keep wouldn’t be conducive to raising a family, which was probably the only thing I wanted more than being a writer.
After graduation, there was college, jobs and marriage. Then kids. Along the way, I would have periods where I wrote feverishly, then I’d take a break. It really took a backseat to the rest of my life. But then, as I entered my late thirties and forty loomed ahead, I made a decision. I needed to pursue writing, finish a novel, and try to get a contract for it. It was now or never. I had to make it happen or put those old dreams to rest. Turning forty was a good deadline.
I spent about a year and half writing, polishing, editing, and editing some more. I started sending out queries and then wrote a second novel, ‘Til St. Patrick’s Day. I turned forty in December, 2011. Three months later, I was offered a contract for ‘Til St. Patrick’s Day by Turquoise Morning Press. Within two weeks, I was offered a contract for my first novel, Enough.
I had done it.  I was no longer just a writer.
I was a published author. 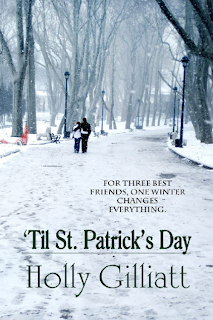 Chronically optimistic Jayne is surprised she’s still single at twenty-eight. But as always for Jayne, there’s hope. This time his name is Gray—a successful, gorgeous marketing VP that she can’t believe is going out with her. She’s never given up on the belief that the right man for her is out there. Maybe Gray could be the one…if she just works hard enough to make it happen.

Her cynical friend Karen is suspicious of Jayne’s new guy with his model looks and over-inflated ego. She’s concerned for Jayne, but has her own relationship to worry about. Not that anything’s wrong with her boyfriend. He’s actually perfect for her, which is why she’s terrified. Not sure she can ever fully trust a man again, she considers bailing on yet another relationship.

Claudia is always there for her friends, mothering them like the children she craves to have. Happily married, Claudia anxiously awaits the day her husband finally agrees it’s time to start a family.

’Til St. Patrick’s Day is a novel about the depths of friendship and what happens when love doesn’t go according to plan.

'Til St. Patrick's Day is available at Turquoise Morning Press

Holly Gilliatt can be found on the web at
www.hollygilliatt.com
twitter: @hollygtweet

Posted by linda_rettstatt at 10:57 PM

You're welcome. I'm sure readers will find your story interesting, as do I. Every writer has his/her unique story of we got into this business. The one commonality we all share is that passion for writing.