How I Became A Writer: Graeme Brown 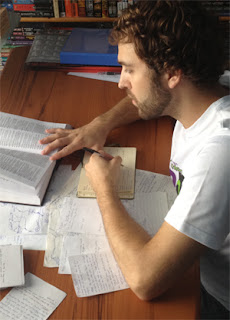 I'm very pleased to welcome author Graeme Brown to tell us his story of how he became a writer.


The turning point for me as a writer came when I decided to tackle a hurdle so universal that a November writing subculture has been devoted it. Those who have made it through NaNoWriMo can relate to how good it feels to get a manuscript finished. For me, tackling my first novel-length story was of my own volition, but I did it quickly, over six weeks, just to convince myself I could do it.

That wasn't enough. I wrote another, then spent several years trying to salvage both of them. The first one, a science fiction that grew into the beginning of a lengthy series, now rests peacefully in a box (awaiting an appropriate time for it's resurrection). The second one soon took over, claiming my energy, since it ventured into the fantasy world I had been creating since I was a boy.

Over that time, I also started reading notable masters of epic fantasy, Robert Jordan, Brandon Sanderson, and George R. R. Martin, to name the three who I admire, and have been influenced by. So, realizing I had a lot further to go, and struggling against a weekly stream of rejection letters from agents, I considered completely rewriting my second manuscript. Before this, though, I took a break, then wrote what I intended to be a short story.

The result was a novella. I called it "The Pact."

I got mixed comments from beta readers. One hated it (note: she also hated George R. R. Martin). Two others had lots of objective comments, and told me the characters were enticing, the description captivating, the story compelling. One reader loved it. I took his comments to heart - he's the George R. R. Martin fan. So, I sent The Pact out, then a month later was looking at a contract from Burst Books.

I tried to get back into the earlier manuscript, but the world of The Pact pulled me in. After a bit of plotting, I realized the stories are connected, and have been able to work in that first fantasy manuscript into another (far distant) one. This last November, in the spirit of NaNoWriMo, I jumped in with two feet to the world of The Pact, and realized there's a lot to be done.

I've been writing all my life, but it was the discovery of the rich epic within, the story that will take a lifetime to unveil, that has turned me into a writer. There's a true joy I feel when I'm writing, and a reason I make time every day, no matter what, to develop my story a little bit more. I've had all sorts of interesting curve balls as a result of this commitment, the best one being the day spent writing on a Safeway patio, with several wasps tormenting me (I managed 300 words, none of them curses). Wasps or no wasps, it pays off knowing that this commitment takes me closer to sharing another story with other people.

So, that's how I became a writer, but underneath this all is the why, and to me this is more important:

Because it's the only way I can take the stories I see so clearly, the stories I love and enjoy, and share them with other people. 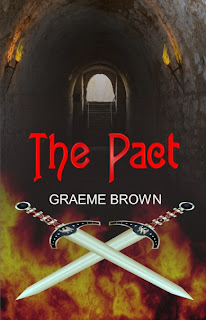 Will Lesterall has grown up in the safety of his father's castle, where tales of the outside world ruled by warring kings and creatures of nightmare have never seemed a threat. Yet on the night celebrating the two hundredth year of the sacred Pact that has kept safe, an old intrigue ripens, and in the course of a few hours Will is confronted with a choice greater than he can comprehend. Join an unlikely hero as destiny pulls him into the middle of an ancient conflict between fallen gods and ambitious women, one that demands blood, both holy and wicked, and the power of an ancient fire bound in steel. As swords clash below a watching wood, hope and betrayal war as fiercely as fear and valor.

Whether he lives or dies, Will Lesterall will never be the same...

Next week: I'll be sharing more about my May releases, UNCONDITIONAL with Turquoise Morning Press, and DARK HORSE (A Novella) with Champagne Books.

Posted by linda_rettstatt at 10:49 PM

So true - it's more fun to share our stories than to write in a vacuum!