Jane Toombs - How I Became A Writer 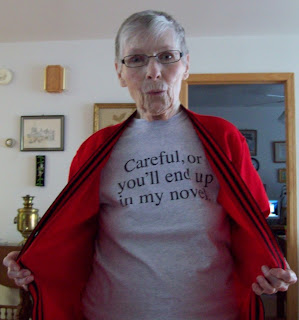 I'm very pleased to welcome author Jane Toombs to share her story of becoming a writer. As you will see, Jane is serious about her writing and pulls no punches.

I think my father’s (he was a nonfiction writer) early and gentle critiquing made me understand that a critique wasn’t a criticism and listening to what he had to say always improved my stories.  I’m sure it toughened me up some so I’ve been able to listen to critiques, understand they’re meant to be helpful, and consider them carefully.
He encouraged me to write little stories and always found something good in whatever I wrote. So I learned to believe in myself as a writer. Which I suppose is at least part of the reason why I became one.
But not seriously until I reached my late thirties. By then I was an RN, married to a doctor and had five kids. Little did I know how my beginning to write again would threaten him.
I began to take evening classes when the oldest girl (the oldest boy was in college) was old enough to watch the younger ones in case my husband had to go out on a call. When the elderly published mystery writer I was taking the class from told me my gothic was good enough to be published and offered to edit it, and then send it to his agent, I naturally hurried to finish it. And, no, he had no ulterior motive, unlike what my husband believed.
Anyway Tule Witch got finished with me paying attention to his edits and he did send it to his agent. Who promptly sold it to . Whoa!
My husband was furious.  He’d read part of it and told me I was writing trash.  Our relationship began to deteriorate. Finally, after he told me it was writing or him, I got a divorce. We sold the house and went our separate ways, me with the kids.
When I finally married again, it was to a guy who liked to write. His theory was if I could sell a gothic, he could. So he wrote one and I sent it to my agent who did sell it.  We both were working at other jobs, but mine was only part time. We had our problems, but the glue of both being writers held us together.
After we retired to his home town in upstate , with his kids and mine all grown, we got along a lot better. We edited each other’s work and sold everything we wrote. Which came to an abrupt end when he died suddenly and unexpectedly during a trip to .
Incidentally, Samhain is republishing both his and my gothics. Tule Witch, my very first book, will be out October 15, 2013, with the rest coming out in 2014.
Fast forward to this year. My SO, the Viking from my past, now has Parkinson’s and I’m his caretaker.  He’s in a W/C but able to propel himself around and even help me by loading and unloading the dishwasher and other odd tasks. Which gives me some time to write? Currently I’m scanning old rights-back books into the computer for Books We Love, Ltd. to publish. Since I’m no techie, I wouldn’t dream of trying to do this myself.  Besides, BWL does edit them and provides striking covers.
I have some series unfinished books I need to get finished and am beginning to work on those as well now that I have care the caretaker routine down pat. My SO totally supports my writing efforts and is proud of me for being a published writer. We’ve known each other since second grade, when I “skipped” there from first grade and the only empty seat was the one in front of him. I was really scared because everyone was strange to me, but he smiled at me and that helped. Am I glad I became a writer? Seems to me I was fated to be one.
Although we never were a couple all through school, we were always friends. And when we reconnected in 1994, we've been together ever since.
And I’m still writing. Up to around a hundred books now. But old age is catching up to me via my hands and so I seriously doubt I'll ever reach the two hundred mark. 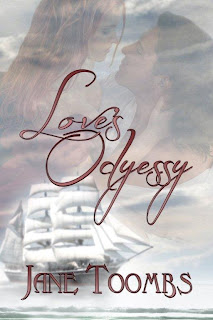 At the cost of his own safety, Adrien saves Romell fom the King's Men who've killed her uncle.  He takes her to her relatives in , then finds himself on the same ship that's taking her to Java, a ship that's wrecked on an island.  He's separated from her before they're rescued and doesn't see her again until  he finds out she's been captured by a Chinese pirate. Adrien is a master swordsman, but is that enough to rescue Romell from her dangerous captor?

Bio:    Jane Toombs has approximately one hundred books to her credit, but then she's an old bat. But not too old to be the caretaker for her SO, who has Parkinson's
and is confined to a W/C. They both are owned by an elderly calico cat named Kinko who sincerely believes she's the most important one in the house. Jane writes in most genres, but her favorite is paranormal. They all live across the road from Lake Superior's south shore in 's beautiful but cold .

Links to all my books can be found at my website: http://www.JaneToombs.com

Posted by linda_rettstatt at 10:17 PM

Jane - your books sound AWESOME! I'll be looking them up. Just curious - where did you get that shirt - I love it!!!! :)

Jane - your books sound AWESOME!!! I'll be looking them up. Just curious - where did you get that shirt - I love it. :)

Terrific shirt--need one of those myself. ;) A multi-talented prolific author with a lot of great things to say!

Jane,
I have the exact same sweatshirt - my sister-in-law gave it to me for my birthday. I loved your post. Thanks for sharing your writing journey. You are amazing and congratulations on your success as a writer!!!

I loved your post. You are a courageous woman, thank you for sharing.

Jane, Though I've been present in some of the events in your life after you moved to upstate NY, knowing you has been a pleasure. I do not have the shirt. Only have one about mystery writers and people who anger then.