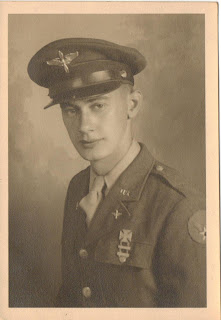 On this Veteran's Day, my thoughts turn toward my father, Dale R. Rettstatt, Jr. He was a veteran of World War II and a soldier all his life.
He served with the 398th Infantry in Europe and earned a Purple Heart. Shrapnel in his neck and skull served as a constant reminder of his service, but he never complained, even when it was obvious he suffered one of the blinding headaches that would nearly cripple him at times. He continued to serve in the 430th U.S. Army Reserve in Brownsville, PA, retiring only shortly before he died in 1981.
My father never talked much about the war, at least not with us, his family. I don't know what he talked about over a beer with his buddies. I knew him to be a patient man, quiet--sometimes to the extreme. I always wondered about the young man who went off to war at the tender age of eighteen. What was that young man like? Did he laugh more easily? Did he talk more freely of his dreams? Did war change him, as it is known to do? I'll never know.
I knew my father as a soldier because he marched in the local parades with his Army Reserve Unit and prepared for two weeks of reserve camp every summer with the enthusiasm of a kid going to summer camp. He loved his country. He loved the Army.
And he loved his family. I knew him as a soldier, but I mostly knew him as Daddy--the man who snuck cookies to me and my sister when he came to say goodnight and tuck us in. The man who taught me to drive, even after I drove him for a block with two wheels on the sidewalk (long story). The man who rescued me from a college party gotten out of hand and then kept a straight face when I told my mother that, yes, I'd been drinking but only because someone spiked the punch. The man who spent an entire day (and made four trips to the hardware store) constructing a wooden frame for a hooked-rug wall hanging I'd made. In the end, the frame didn't fit. And it didn't matter. I'd spent the day with my dad. 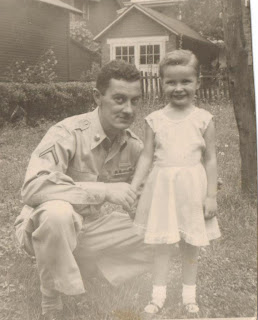 A man who was steadfast, loving (in actions, if not in words), generous, dependable, quiet, and loyal. A man who had a wry sense of humor that, if you were fortunate, you got to glimpse.
On this Veteran's Day, remember the men and women who have served our country and those serving today.

Linda
Posted by linda_rettstatt at 9:58 PM

What a great story. thank you so much for sharing. I'm looking forward to reading about your other guest bloggers.

A beautiful tribute to a loving father. Mine was never in the military, too young for WWI and too old for WWII, but he did Civil Defense. He also taught me to drive and had the patience of Job.

Weren't we lucky to have men like that in our lives. No wonder our heroes are the good guys.