Thinking Outside the Box and into Editing Trouble


There’s one thing more than any other that’s influenced the way my books are constructed, something people have come to call my “style.” I suppose I’m a child of my time…and my time was the early 50’s, when moving pictures were the most popular form of entertainment before the Boob Tube usurped it.

In those days, there were not only dramas and westerns but sweeping epics of adventure, costume tales of pirates, Robin Hood, the Scarlet Pimpernel, rogues and rascals, and villains. Nowadays, you rarely see those, except for an occasional Indiana Jones rip-off or something ike Game of Thrones, or if Cinemax steps in with The Borgias. It was the time of Frank Yerby, Samuel Shellabarger, Rafael Sabatini…men who wrote what would probably be termed the picaresque novel, tales of heroes conquering mountains and nations, and discovering new worlds simply because they were there, between bedding every viable female in sight. Their stories were made into Technicolor sagas enthralling this little viewer for hours (in those days, you could pay your money and stay in the theatre the entire day if you wished.) And when I began to write, I unconsciously patterned my stories after theirs.

One series—The Adventures of Sinbad—seems to mirror those stories enough that several readers have told me they “absolutely adore” my main character. I admit it’s easy to see him swinging across the deck of a ship, with dagger between his teeth while he hangs onto the heroine with one hand and a rope with the other, a la The Crimson Pirate. In fact, I think I had him do something almost like that in one story…

Other novels open with an incident leading to a flashback. In fact, one novel is simply one extended flashback, returning to the present only in the last chapter. Others are more linear, with cuts to other points of view showing things happening at the same time in other places, the dialogue interspersed with stage direction-like movement. That gets me in trouble with my editor because my mind is seeing a movie screen with close-ups of various characters’ expressing their thoughts as a voice-over tells us what they’re thinking. Putting that and those thoughts into print ends up with the “talking heads”, multiple POVs phenomenon. It doesn’t bother me because I see it as a natural part of the “script”, but it gives my editors fits.

In telling my tales of adventure, romance, violence, danger, and—on occasion—lust, I harken back to those days in those darkened theatres as I shoveled in the popcorn while my eyes were glued to that silver-beaded screen. Good or bad, that’s just the way my mine works, and so far, it’s successful, except for the POVS, and I’m working on that. The results are, in several reviewers’ opinions, “readable and enjoyable tales…outside the box”…which I owe to two things: my imagination and those childhood entertainments.

And then television came along…and opened the box even wider… 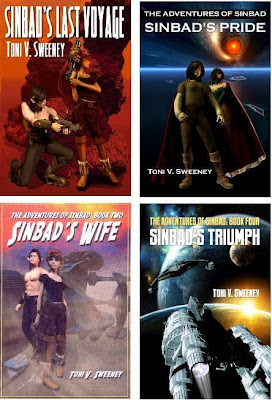 
Toni V. Sweeney was born after the War Between the States and before the Gulf War. A native Georgian, she has lived on both coasts, thirty years in the Midwest and is now trying for thirty more in Nebraska. Her first novel was published in 1989 and she currently has 27 novels in publication. Her lastest novels The Earthman’s Bride, written under her pseudonym Icy Snow Blackstone, and Exile, Book 2 of the kan Ingan Archives, were released in April of this year, and another novel, The Rose and The Dragon, is scheduled for June, to be released by Class Act Books in August, 2011.

Posted by linda_rettstatt at 12:16 AM

Hi Toni - me too - a child of the 50's - and a bit earlier. I recall all those memories about movie theaters and TV and especially those Fernando Lamas or Cornel Wilde heroic epic movies, probably low budget, with great heroes saving the female. Thanks for reminding me of those fun times

Thanks so much, Toni, for sharing your writing style and experience with us.

I've appreciated Toni writing reviews on some of my works. Carol

Toni - love that discussion - referring back to the 50's - as I too am a child of that era and a little earlier. Those old TV days and people like Cornel Wilde in this epic B movies - or that red headed gorgeous women - Arlene Dahl or someone like that who was always kidnapped and put in a harem. Thanks.